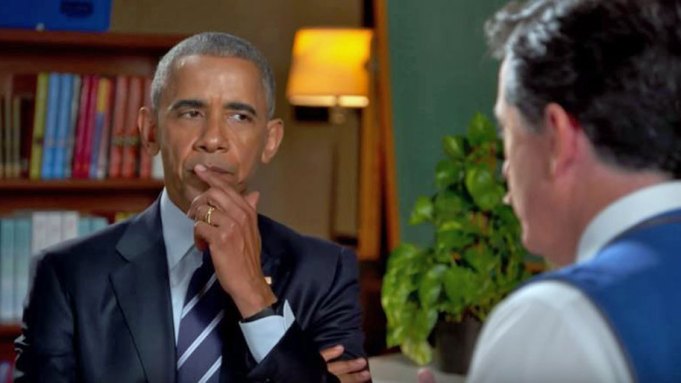 Stephen Colbert asks President Obama the question we all want answered in a preview of his appearance on “The Late Show with Stephen Colbert” tonight: what snack would the President rather have?

The short clip on “The Late Show” YouTube channel shows Colbert posing as a man named Randy with a fake mustache and telling the President that he cannot endorse a candidate because he is on a network television show.

However, Colbert does want to find out whether the President would “care for an extra fiber nutrient bar which has traveled to more than one hundred countries,” or a “shriveled tangerine covered in golden retriever hair, filled with bile that I wouldn’t leave alone with the woman I love,” two choices which bear a startling resemblance to Hillary Clinton and Donald Trump.

Check out the President’s surprising (or unsurprising) response in the video above.

Colbert recently finalized plans for a live Election Night special on Showtime that will allow “The Late Show” host to let loose on the 2016 presidential race in an advertising-free environment.

“It’ll be all the political comedy you love from my CBS show, with all the swearing and nudity you love from Showtime,” said Colbert said of the special.