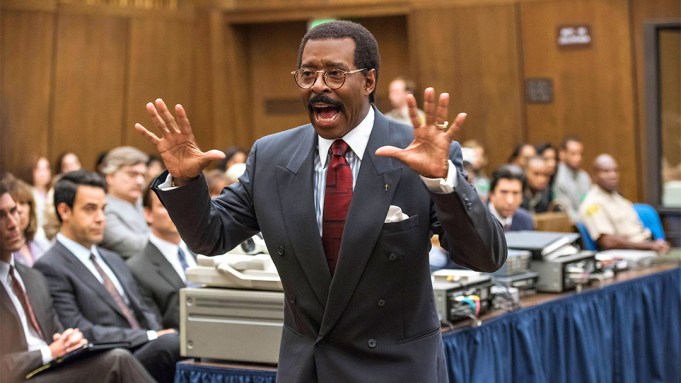 “The People v. O.J. Simpson: American Crime Story” star Courtney B. Vance admits that he didn’t watch the O.J. murder trial — aka the Trial of the Century.

“I didn’t know him at all, nor did I follow the trial,” Vance said of defense attorney Johnnie Cochran, who he portrayed in the FX miniseries. “I followed O.J. Simpson. I was a huge O.J. Simpson fan from when he was at USC and then when he went to Buffalo in that cold weather.”

Vance said he was such a fanatic that he couldn’t bear to watch Simpson’s now-infamous Bronco chase. “I was hurt to my soul,” he told “Black‑ish” star Tracee Ellis Ross on Variety and PBS’ fourth season of “Actors on Actors.”

Instead of watching footage of the trial or documentaries about it, or talking to Cochran’s family members or then-colleagues (Cochran died in 2005), Vance read about the famous lawyer.

“How do you play somebody that everybody knows?” he asked aloud.

Vance said he needs a kernel of key information about the person he’s portraying in order to be able to tap into that character. In his research, he discovered that Cochran’s mom placed him in “white schools” from an early age to get him exposed to a different world — something Vance could relate to. And that’s all he needed for his awards-buzz-generating performance.

The two-part fourth-season premiere of “Variety Studio: Actors on Actors” airs June 12 and June 19 on PBS SoCal. The episodes will also be available to stream on Variety.com.