‘Outlander’ Recap: Sam Heughan Breaks Down the Victories and Losses of ‘Prestonpans’ 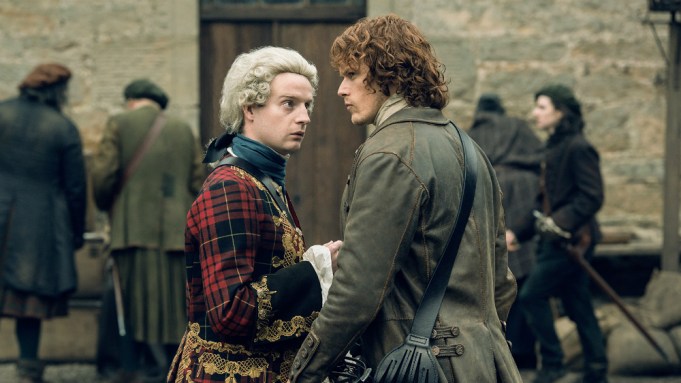 Spoiler warning: Do not read on unless you’ve seen “Outlander” Season 2, Episode 10, titled “Prestonpans.” Catch up on our previous “Outlander” recaps and coverage here.

It’s not surprising that “Outlander” star Sam Heughan calls “Prestonpans” his favorite episode of Season 2; after half a season of watching Jamie struggling with the duplicity required to carry out his mission to change history, the Frasers’ return to Scotland has brought about a noticeable change in our hero. “I wanted the journey of Jamie to be, from the start of the season, that he’s a shadow of himself,” Heughan tells Variety. “He’s hiding behind this persona, but also he’s psychologically scarred, and physically as well.”

Oddly, It was an encounter with his rapist, Black Jack Randall, that allowed Jamie to find peace and regain his confidence, “so by the time we get to Episode 10, Jamie has become the leader of men that he’s supposed to be,” Heughan says.

Jamie has the loyalty of his men and the trust of Bonnie Prince Charlie, but as the Jacobites hurtle closer towards the catastrophe that awaits them at Culloden, Heughan notes, their situation “gets more and more desperate.”

But all hope is not lost yet, he says: “There’s this finite point, which is Culloden… Jamie and Claire are trying to stop that battle from happening because at that point, they know that everything is lost. As we get closer to that, the stakes get higher. But they think they can change history,” even at this late stage.

That leads us to the Battle of Prestonpans, which gives the Scots a vital and decisive victory against the English — but that success comes at a high cost. After winning Charles’ admiration for a daring act of defiance earlier in the episode, by the end of the hour, Dougal has fallen out of favor with the prince by demonstrating his disdain for the English soldiers who have oppressed the Scots for so long — killing their injured enemies on the battlefield instead of bringing them back to have their wounds tended (even one of the few noble members of the opposition, Lieutenant Foster). Dougal narrowly manages to avoid being expelled from Charles’ army, thanks to Jamie’s quick thinking, but still finds himself “exiled,” even as he’s promoted to lead a new force of Highland dragoons. Young Fergus, who has already been through his share of trauma after being assaulted by Black Jack, disobeys Jamie and Claire’s orders and goes out to fight, ending up stricken by the reality of taking a life; and the beloved double-act of Rupert and Angus is broken, with Angus dead and Rupert left in mourning for his best friend, casting a pall over the post-battle celebrations.

“Outlander” pulled off the atmospheric Battle of Prestonpans in a fairly unusual way; the scene was actually shot in a gigantic tent that production set up in the Highlands, Heughan reveals: “We had hundreds of extras in there, we had horses, there were cannons — they filled this thing with smoke. A lot of the scenes are the Highlanders running into battle and you couldn’t see the enemy, you couldn’t see the people you were fighting with.”

It’s an impressively staged scene that perfectly encapsulates the chaos and carnage of battle, which also serves to emphasize the cost of war — something Claire knows all too well. After seeing our heroine struggling with PTSD in last week’s episode, following her harrowing experiences during WWII, it’s good to see her back on her feet this week, ably taking charge of triage and helping to save a number of lives in the wake of the battle — even if she’s ultimately unable to help Angus.

For Heughan, one of the most powerful moments in the episode comes after the fighting is done. “I love the moment when Jamie and Murtargh finally see Claire again back in the hospital; I wanted to show that they’d almost been in this daze — crazed fighting. It was a great victory for them and they were massacring people, and that’s when it hits them what they’ve achieved, but also what they’ve lost.”

What did you think of “Prestonpans” and the loss of Angus? Weigh in below.