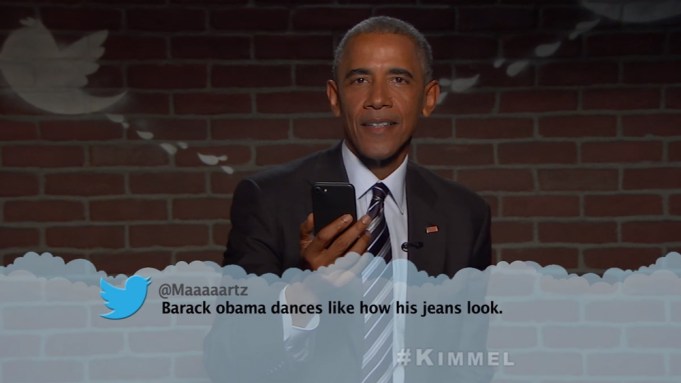 He, of course, saved the best tweet for last. “President Obama will go down as perhaps the worst president in the history of the United States,” Obama read. The kicker? The author of the tweet was none other than Donald Trump. “Well, @realdonaldtrump, at least I’ll go down as a president,” Obama responded before dropping the smartphone.

Obama, who was in Los Angeles for a fundraising trip — including a Hillary Victory Fund event at the home of Jeffrey Katzenberg — also slammed the Republican presidential candidate during the show. Asked by Kimmel if he ever laughs while watching Trump during the debates, “Most of the time,” Obama responded.

Obama’s third appearance on the show spiked viewership, driving “Kimmel” to a 2.7/7 household rating compared to a 2.1/6 for both NBC’s “The Tonight Show Starring Jimmy Fallon” and CBS’ “The Late Show With Stephen Colbert” — Kimmel’s best since Obama’s last visit on March 12, 2015.