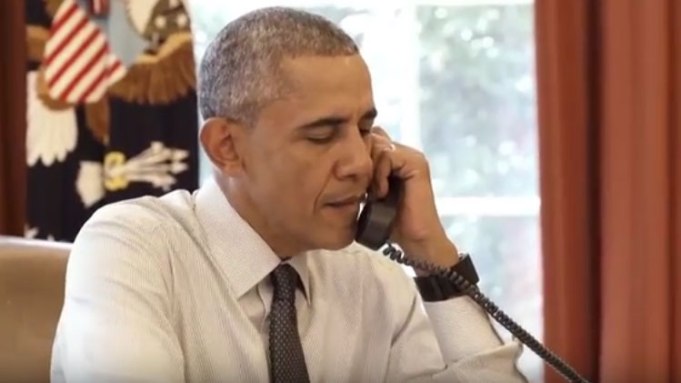 Ahead of President Barack Obama’s historic trip to Cuba, he appeared on a Cuban sketch show with one of the country’s most famous comedians.

Luis Silvia, known for his character Panfilo, posted a sketch on Saturday  featuring the President himself. Though the humor may not translate exactly, Obama plays along as Panfilo calls the “Casa Blanca” and is surprised to get a direct line to the Commander in Chief himself.

Panfilo calls the White House to see if it will rain on Tuesday, when Obama is set to attend a baseball game. They then go on to address Obama’s visit.

“I am so glad you will come to visit so you can know Cuba, its people,” says Silvia.

“I’m looking forward to it,” Obama reassures him. “The American people and the Cuban people are friends.”

Panfilo naturally takes this a step forward, giving Obama travel advice and offering him a ride to the airport.

Panfilo stars in a weekly television show in Cuba, which is estimated to be seen by two thirds of the country. In it, Panfilo has a running gag in which he attempts to call the American president — this sketch, obviously, goes a bit differently.

Obama arrives in Cuba on Sunday, and will stay in the country for three days.