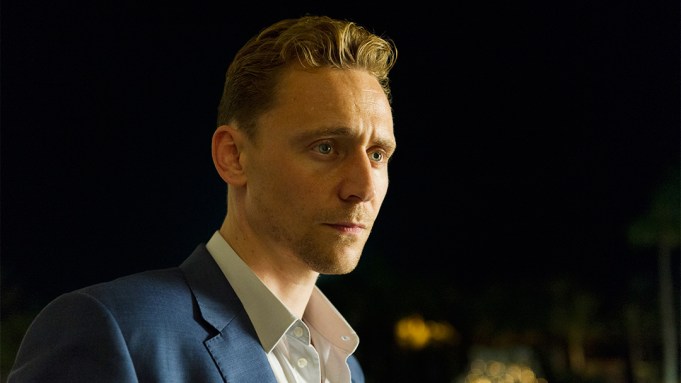 AMC’s limited series “The Night Manager” wraps its six-episode run tomorrow night, and the finale promises to be a killer. “It’s very dangerous,” says executive producer Stephen Garrett. “It doesn’t look good for them. The strong sense that we hope we have is any one or any combination of people could not be alive at the end of this.”

At the hotel bar, he surreptitiously flirts with her, not far from Roper’s prying eyes.

“Who needs another drink?” he says, as he sidles up next to her. “Smile at me. Laugh,” he tells her, trying to keep Roper from getting suspicious.

“I can’t do this any more, Jonathan,” she says, referring to her role as double agent. She’s been spying on Roper, and reporting back to Pine. “I can’t sleep with him another night.”

“You have to. This isn’t just about you and me,” he says, as he caresses her hand under the bar, out of sight.

He tells her that a courier came and delivered papers about the shipment of illegal weapons; she tells him they’re in the hotel safe. She promises to get him the combination as their illicit flirtation continues, with Roper just a few feet away.

“Be careful,” he cautions, as a wary Roper looks on.

Garrett tells Variety things get “scarier still” from here. “This is just the beginning,” he says.

“You’ve seen in the terrifying scene in the tent where Roper’s interrogating Jed, there is a part of him that does love her. He doesn’t want it to be the case that she’s turned against him. That scene in the bar encapsulates it. It’s a Tarantino-esque standoff without guns. If they had guns, they’d all be pointing guns at one another. Every one of them could destroy the other. Jed could destroy Pine. Jed is, with Pine, in the process of destroying Roper. Roper can destroy Pine. There is an incredible tension about that moment. It’s deeply scary, even though on the face of it, you just have three people having a drink.”

The question is, of course, why Roper continues to trust Pine, even in the face of mounting evidence of his betrayal. Garrett calls it “an inconvenient truth,” and that’s why Roper is willing to look the other way.

“The genius of the storytelling is that the place where Pine finds himself is, by killing Corky and by having Jed rather brilliantly improvise a little backstory about finding her lost phone, there was a plausible story for Roper to embrace about the possibility-turned-probability that Corky was the spy in his camp,” says Garrett. “Roper desperately wants to believe that Pine is the son he never had. And so were he more vigilant, yes, he might be more suspicious of Pine. It’s almost like he’s willing a betrayal. We’ve all seen serial killer movies where the killer flirts with the police and leaves clues. He’s playing with him. It’s that kind of danger that feeds Roper. He knows he’s always walking a very dangerous line. And staying in a position of trust with Pine is part of that process. This is a huge deal. He’s got to go through with it. And Pine, through the iris recognition technology, is the only person who can complete the transaction. We all have the experience of brushing the obvious under the carpet. So he’ll do anything to look the other way.”

And yes, we’re finally starting to see the ugly side of Roper, the so-called “worst man in the world.”

“If he’s someone that you’d like to be sat next to at dinner, up to this point, I think now you not only don’t want to be at the same dinner party, ideally you want to be in another country,” says Garrett. “Let those icy blue eyes never stare upon me again!”

As for the rumored spinoff, Garrett says the official line is that there still isn’t one.

“I think just because the first one set such a high standard, what nobody would want to do, is cobble one together that feels like a cynical attempt to exploit the success of the first one,” he says. “There would only be another one if everyone involved was confident that it would either be as good or better. In other words, it would have to be ‘Godfather 2’.”