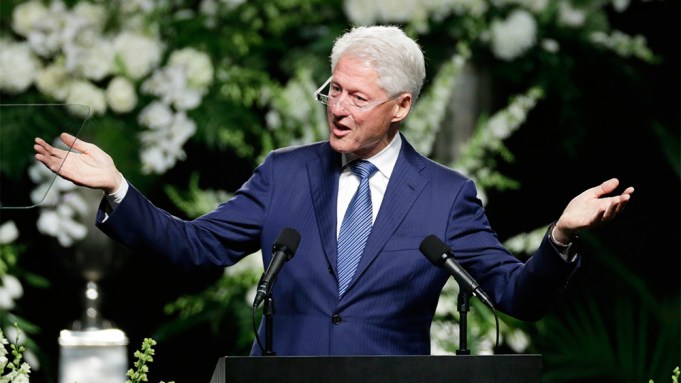 Bill Clinton, Billy Crystal, Will Smith and a host of mourners gathered Friday in Louisville, Ky., to remember boxing legend Muhammad Ali. The three-time world heavyweight champion was honored in a public memorial service in his hometown.

The service began with a reading from the Quran in recognition of Ali’s Muslim faith, followed by speeches from religious speakers of many different beliefs, inkeeping with Ali’s desire for an interfaith service.

The public service at the KFC Yum! Center was the last leg of a three-day memorial plan that Ali developed himself. The plans included a city festival Wednesday and a Muslim prayer service Thursday.

Clinton described Ali as a “universal soldier for our common humanity” when he took the podium.

“I think he decided very young to write his own life story,” Clinton said. “In the end … I will always think of Muhammad as a truly free man of faith.”

The former president said the first part of the athlete’s life was dominated by the triumph of his unique gifts.

“But the second part of his life was more important because he refused to be imprisoned by the disease that kept him hamstrung longer than Nelson Mandela was kept in prison in South Africa,” he said. “In the second half of his life he perfected gifts that we all have. Every single solitary one of us have gifts of mind and heart.”

Billy Crystal brought humor to the somber occasion, cracking joked and delivering an impression of Ali.

“We’re at the halfway point,” Crystal quipped as he opened his remarks, referring to the three-hour service. “I was clean shaven when this started.”

“35 years after he stopped fighting, he is still the champion of the world,” Crystal said before recalling how the legendary boxer refused to fight in Vietnam War (“It was Ali who stood up for us by standing up for himself”) and sharing a story about how Ali never ran at his favorite Country Club once Crystal told him that they didn’t allow Jewish people there.

“[He] taught us that life is best when you build bridges between people and not walls,” Crystal said, bringing the crowd to its feet.

Gumbel, who spoke after Crystal and before Clinton, said Ali “gave us levels of strength and courage we didn’t even know we had.”