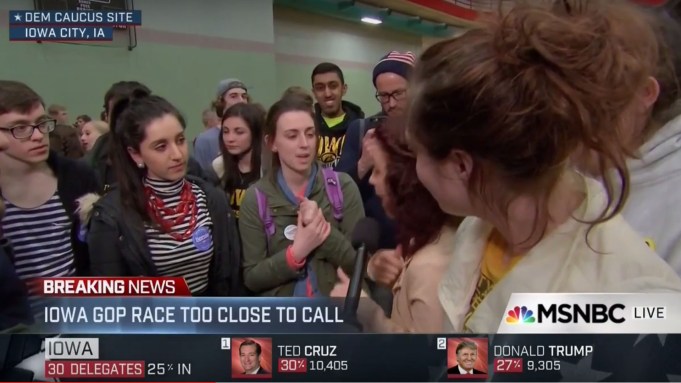 Brian Williams, in his first major prime time assignment of 2016, had to apologize Monday night after a young voter slipped an f-bomb into MSNBC’s live coverage of the Iowa caucus.

When asked about Bernie Sanders’ stance on veterans’ healthcare, the young woman chimed in: “The VA is more screwed up than it has been in a while. I am a vet, my mom’s a vet,” adding: “The fact that I haven’t gotten benefits in three months because the VA is so f—- up.”

The audio was quickly turned down as Williams took to the air and apologized.

“When you listen in to caucuses, you take the good with the bad,” he said. “People often talk the way they do on the street.”

“We apologize for a bit of French that snuck in to our French to English translation there.”

Williams, joining MSNBC’s Rachel Maddow, was making his first primetime news anchor appearance since his six-month suspension from NBC for fabricating war stories. He most recently worked on MSNBC’s breaking news desk, where he led coverage of the Paris attacks and the Pope’s recent trip to the United States.