Mindy Kaling on the Freedom of Hulu, ‘Mindy Project’ Future: ‘I Have an Ending in Mind’ 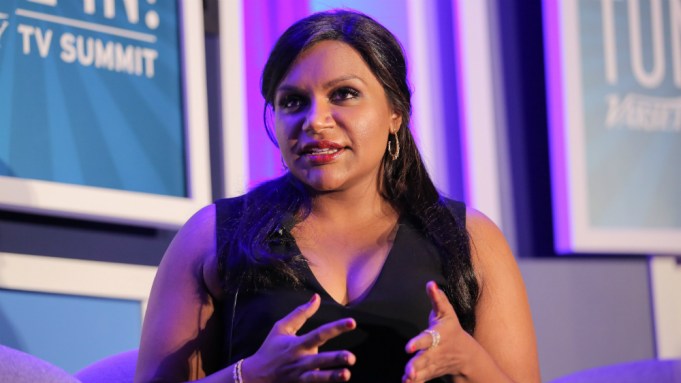 Mindy Kaling does not miss the panicky day-after phone calls that are a way of life for showrunners on network TV series.

“The Mindy Project’s” move from Fox to Hulu last year for its fourth season has been a creatively “freeing” process that has been invigorating, Kaling told the crowd Tuesday at Variety’s TV Summit.

The lack of pressure that comes with overnight ratings reports is a welcome relief, Kaling said during her keynote conversation with Variety’s Elizabeth Wagmeister.

“I don’t know what the ratings are. They tell me we’re doing great and that’s it,” Kaling said. “I think that’s great. I don’t need the Wednesday morning panicky feeling. The ratings from the [night before] govern your entire morning. I’m so happy not to be part of that anymore.”

Moreover, Kaling appreciates the certainty that she has on Hulu about the number of episodes for each season. “I know going in how many episodes it’s going to be. We go in planning our season, not hoping that one of your other friend’s shows dies so that you can get a back nine.”

“Mindy Project” delivered a whopping 26 episodes for its fourth season and has been renewed for Season 5. Although the workload was intense for Season 4, Kaling kept her staff lean by design. She has a co-showrunner in Matt Warburton and Howard Klein as exec producer to liaise with the network and handle other business-centric matters that crop up. And her writers room is only a handful of people by choice. “When I was on ‘The Office’ we did 22-24 episodes with a staff of seven or eight writers. I like the feeling as a writer that the show is going to be good or bad based on your contribution to it. I like that feeling of being on the hook.”

Season 5 is likely to run 16 episodes, broken up into eight-episode blocks, she said.

Kaling referenced the twists and turns that the show has experienced as being a good education for her as a showrunner and as a leader. “Mindy Project” was initially developed for NBC, then got picked up as a series at Fox, and then moved to Hulu when Fox dropped it because “Mindy” reruns had performed so well for Hulu.

Kaling gave a shout-out to former Universal Television president Bela Bajaria for showing her by example how to be an effective leader. Kaling was on camping vacation in Montana with her “30 Rock” writer Tracey Wigfield last summer when she got the call that Fox was dropping “Mindy Project” after three seasons.

Bajaria “neither luxuriates in praise or in failure,” Kaling said. “She told me ‘Fox is opting not to pick up the show and we’re going to have it on Hulu.’ That was her plan. I think that’s very leader-y. When you’re a showrunner you’re not always bringing the best news to your staff. But I appreciated that she came with a plan. No one wants to see their leader say ‘I don’t know what we’re going to do.’ I really appreciated that she had a plan.”

Among other highlights from the conversation:

** Kaling credits the explosive growth of TV options for allowing her show to exist, especially in its current form where her ethnicity is not the central focus of the show. “For someone who looks like me — my career only exists in this new time when there is so much opportunity. As recently as five or six years ago minorities could only be on television if that was what the show was about. (But) the name of my show is ‘The Mindy Project’ not ‘The Indian Girl Project.’”

** How long does she envision “Mindy” running? “I have an ending in mind. I don’t know when it would be,” she said. She has aspirations to write and direct a movie and do other pilots. “I am tempted by a lot of other interesting things.”

** Kaling cited Tina Fey and Emma Thompson as important role models. Seeing Thompson nominated at the 1996 Oscars for both acting and writing was eye-opening for Kaling.

** Kaling is using “Sex and the City” as a guide for how it is handling the transition of the character of Danny that Chris Messina plays on “Mindy Project” in the fabric of the show. She cited how Chris Noth’s Mr. Big remained a presence on “SATC” even though he was not seen much in the later seasons. “He’s going to be in it — it’s just that not having him in every episode allows my character to have adventures without having the specter of my ex-husband there.”