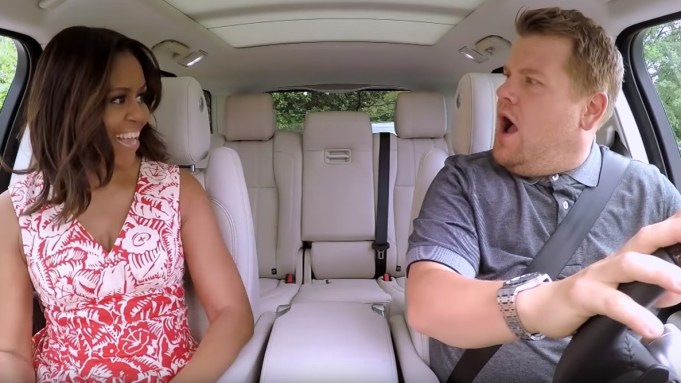 The political scene have have been preoccupied with Ted Cruz getting booed and more news out of the Republican National Convention Wednesday night, but First Lady Michelle Obama was able some alternative programming with the help of James Corden.

FLOTUS joined “The Late Late Show” host for a “Carpool Karaoke” segment that was teased earlier this month. And it was “a treat” for her, who rarely gets a chance to rock out in the car.

And rock out they did — the two sang Steve Wonder’s “Signed, Sealed, Delivered,” as well as Beyonce’s hit “Single Ladies” (dance included). “We were making honey to put in our lemonade,” Obama joked of their dancing.

Rapper Missy Elliott joined them partway through the ride, helping the duo sing “This Is for My Girls,” and Obama talked up her Let Girls Learn initiative, which aims to promote education for girls around the world. And they couldn’t pass up the opportunity to segue into one of Elliott’s biggest hits: “Get Your Freak On.”

“Carpool Karoke” has become a trademark segment for Corden’s late-night show, and Obama is only the latest big get for the popular series. Past participants in Carpool Karaoke include Gwen Stefani, George Clooney and Julia Roberts — all in one episode — as well as Lin-Manuel Miranda, Selena Gomez, Adele and Jennifer Lopez.