Megyn Kelly on Trump Attacks: ‘Courage Is What We Need’ (VIDEO) 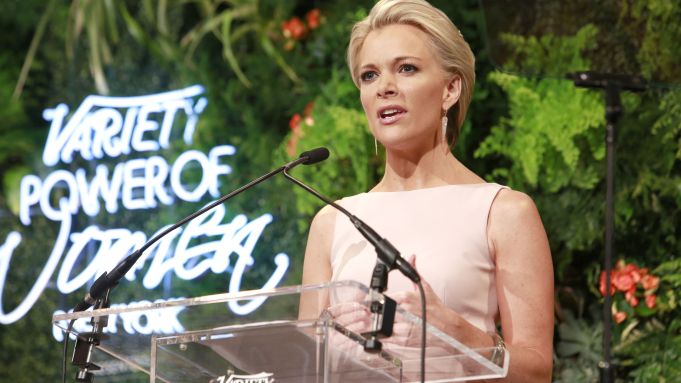 Fox News Anchor Megyn Kelly tackled hot-button issues at Variety’s “Power of Women” event on Friday. In a powerful speech, Kelly addressed her growth as a reporter and anchor, her run-ins with Donald Trump, child neglect and how to deal with fear.

She recalled a conversation with Katie Couric from two days prior, in which Couric asked Kelly what she learned from the first presidential debate and her contentious back-and-forth with Trump.

“Has anyone here heard of that?” she joked.

“Fearlessness is false,” she told the audience at Cipriani’s in New York. “Adversity is an opportunity, and John Denver had all the answers.”

She added: “I’m scared about a lot, often. Fear is normal; the goal is not to get rid of it but to walk through it. Courage is what we need.”

“OK, I’m tough,” she later confessed in response to Vanity Fair calling her “the Toughest Anchor at Fox.”

She also talked about early start as a TV journalist.

“It was 13 years ago that I was sitting at home in Baltimore, Maryland, an unhappy lawyer with a newly minted resume and dreams of breaking into broadcasting,” she says.

She didn’t have any connections in the news industry, but when she tuned into Lifetime’s “The Jessica Savitch Story,” about the newswoman who broke into the business in the ’70s and became very successful when it was a man’s industry, Kelly thought that if Savitch could do it, she could too.

She cold-called many TV news directors, including Bill Lord, who ultimately gave her that first job, and Roger Ailes, who took a chance on her and put her on national TV and provided her “all the opportunity a young reporter could ever ask for.”

Kelly began the eight-minute speech by talking about Child Help, a charity that helps abused and neglected at-risk children, founded by Sarah O’mara and Ivonne Federson — stars of “Ozzie and Harriet.”

“Our babies are dying, not because of disease or warfare, but because of anger or apathy or other conscious decisions made by their own caregivers.”

She brought attention to the number of reported cases of child abuse, saying that “nearly 20 cases” had been reported since she began her speech.

“That’s just the ones reported,” she adds.

Child Help tries to educate children through in-school programs and has a hotline that can provide help in 170 languages. It also has recovery centers called villages where the most severe cases go, receive therapy and begin their recovery.

Kelly asked the audience to donate to this charity that helps kids and “greets every boy and girl with ‘All who enter here will find love.'”

“It’s dignity, courage, principal, independence,” Kelly said. “It’s showing, not telling, the world that we are a force to be reckoned with.”

The Fox News anchor also spoke of her late father and his love for John Denver songs. The lyrics for Denver’s “Today” remind her of how she wants herself, her children and everyone is the audience to live.

She ended her speech with the lyrics from that song: “Today is my moment, now is my story. I’ll laugh and I’ll cry and I’ll sing.”