Meghan Trainor Falls While Performing on ‘The Tonight Show’ 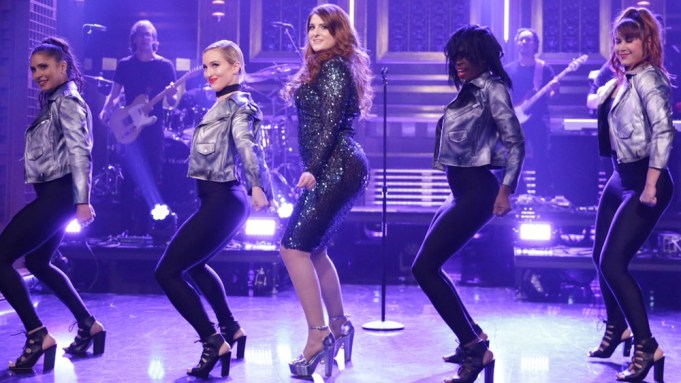 The Grammy winner lost her footing in her sky-high heels and fell right after effortlessly delivering her new single “Me Too,” landing flat on her back.

Ever gracious host Jimmy Fallon joined her on the floor.

“Of every single dance move, grabbing the mic is the toughest,” Fallon joked, referring to Trainor’s attempt at reaching for the microphone right before the big fall. “Standing ovation for Meghan Trainor, everybody!”

Trainor later tweeted that she was proud of the performance, despite taking a plunge.

“Might have [fallen] down … but I KILLED that s— hahaha,” she tweeted. “#keepinitreal. Thank you, @fallontonight.”

Might have fell down… but I KILLLED that shit hahaha #keepinitreal 💯 thank you @fallontonight… https://t.co/3CCHNTvBO4

Trainor also responded to fan inquiries about whether she’s hurt.

“I didn’t feel it ’til hours later,” she tweeted. “I’m all good though. Barely a scratch.”

Haha I didn't feel it till hours later . I'm all good tho. Barely a scratch https://t.co/kVMiCxFJnM

The singer talked about taking a spill on Friday’s “Good Morning America,” saying she’s a bit banged up today.

“I’m feeling it today. I feel little bruises everywhere,” she admitted. “I was fine.”

Trainor also made headlines last week when she pulled the music video for “Me Too” after realizing that she had been Photoshopped in a dance scene. She later released the Photoshop-free version on YouTube. Her new album, “Thank You,” was released on Friday.