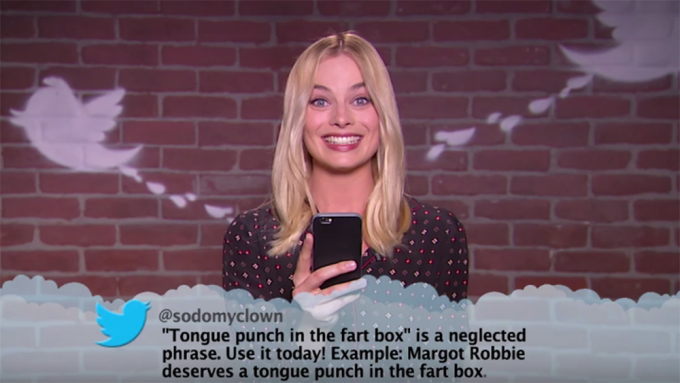 Hugh Grant kicked things off: “Watching Hugh Grant and his stutteringly pathetic ‘charm’ is about as appealing to me as closing my scrotum in a DVD case,” he read.

“Do y— … Are these real, or do you make them up to be especially nasty?” Grant asked with stutteringly pathetic charm.

“The Walking Dead” star Reedus took a bite out of an apple after reading an especially suggestive tweet.

Paul Rudd took some heat for being an everyman. His tweet read, “Paul Rudd is the most boring, vanilla dude. You know he just sits at home with his wife having a bland spaghetti dinner talking about his day.”

Zac Efron, Olivia Wilde and Russell Crowe were also among the stars who fell victim to the internet’s bitterness.

But perhaps no moment during the segment topped Bryan Cranston who read, “Bryan Cranston looks like Jim Carrey impersonating Matthew McConaughey,” which is followed up with a genius McConaughey impression that transformed into Carrey part way through.