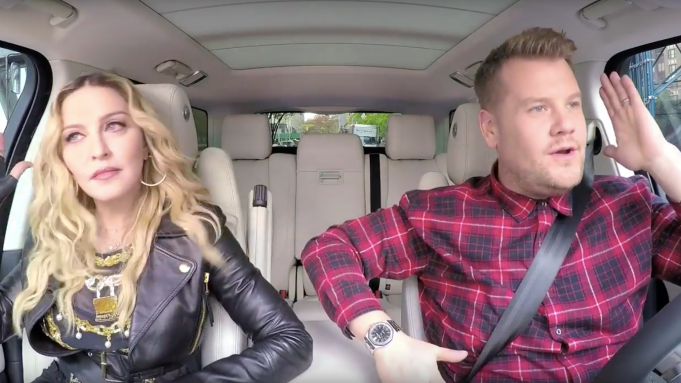 Strike a pose: The Material Girl has taken her turn in James Corden’s famous passenger seat.

“Thank you so much for showing me around the city,” says Corden. “I don’t know New York that well. Do you mind if we listen to music?”

Answers Madonna: “I don’t really like riding around in a car unless there’s music.”

The two show off their best “Vogue” moves — and even a booty dance.

Corden presses Madonna on what a night out with Michael Jackson was like, to which she responds: “You want me to kiss and tell then, don’t you?”

The two also perform a snippet from her song, “Bitch I’m Madonna.”

Madonna — the best selling female artist of all time — is just the latest to take a ride with Corden for his hugely popular viral video series, joining the ranks of Adele, Lady Gaga, Britney Spears, and First Lady Michelle Obama. The series has also won an Emmy award for best variety special.

Madonna has a concert film debuting on CBS Corp.-owned Showtime on Dec. 9, based on her “Rebel Heart” tour. The film covers the seven-month, 55-city tour that concluded in March.