‘Luke Cage’ Showrunner: ‘The World Is Ready for a Bulletproof Black Man’ 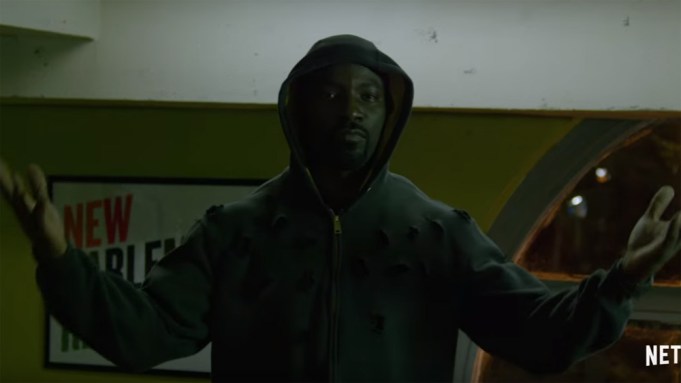 When “Luke Cage” premieres Sept. 30 on Netflix, it will mark the first time that an African-American superhero has led a Marvel series or movie. Executive producer Cheo Hodari Coker says that the character, created in 1972, is now especially timely.

“There aren’t a lot of African-American superheroes,” Coker said Thursday at Comic-Con. “I’ve been reading comics since I was eight or nine years old. Luke Cage stood out.”

He added, “When I think about what’s going on in the world right now, the world is ready for a bulletproof black man.”

Coker, a former journalist who once worked at Vibe magazine, talked about the importance that music plays in the show. Every episode is named after a song by the rap duo Gang Starr. One of several clips from the show screened during the panel prominently featured an enormous portrait of the Notorious B.I.G.

“It’s what I call the Wu Tang-ification of the Marvel universe,” he said.

Alfre Woodard, one of the show’s stars, praised Coker’s writing. “When I picked this up, it was one of the smartest pieces of writing I’ve ever come across,” she said.

Coker signed on in March, 2015 to serve as showrunner for “Luke Cage,” which spins out of Netflix’s second Marvel series, “Jessica Jones.”

The panel was the first ever at Comic-Con for a Marvel-produced show for Netflix. When introducing that panel, Jeph Loeb, Marvel’s head of television, said it was the first of what he hoped would be many Marvel-Netflix panels in the future. “The folks at Netflix really need to understand how great an audience this really is,” Loeb said.

The Marvel-Netflix train shows no sign of slowing down, if the teasers for “Iron Fist” and “The Defenders” were any indication. In addition to premiering the first trailer for the fourth superhero series in their deal, “Iron Fist,” the two companies also debuted a coy promo for their superhero team-up miniseries during the panel, with Daredevil’s Stick Scott Glenn providing a suitably mocking voiceover for the upcoming crossover between superheroes Daredevil, Luke Cage, Jessica Jones and Iron Fist.