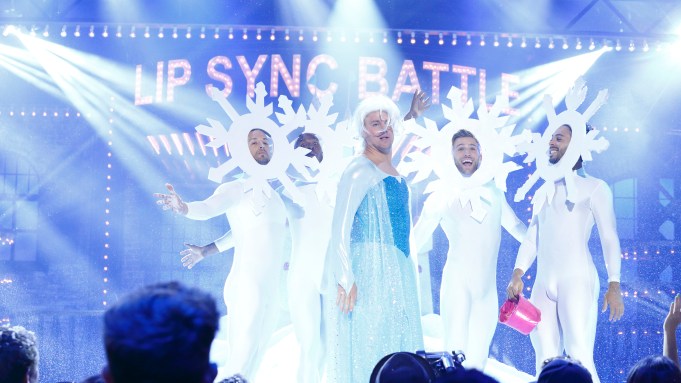 Channing Tatum is doing his part to keep the “Frozen” frenzy alive with his performance of “Let It Go” in the season premiere of Spike’s “Lip Sync Battle.”

A teaser clip of the episode shows Tatum dressed as Idina Menzel’s Queen Elsa from the Disney movie and acting out the chorus of her signature song. There are also dancers dressed as snowflakes and a large, snowy castle. He is competing against his wife, Jenna Dewan-Tatum, although the clip doesn’t divulge her entry in the competition.

“Lip Sync Battle” producer Casey Patterson recently told Variety about her love of all the parts of the show.

“Sometimes you do need a little bit of magic, and that’s what happened with ‘Lip Sync Battle,’” Patterson said. “I love comedy, and I love live and I love variety, so ‘Lip Sync Battle’ was just the perfect storm, and it launched the company in a really nice way right in our wheelhouse with a celebrity talent-driven, shareable, viral, new world format.”

Tatum is far from the first person to cover “Let It Go.” Both Pearl Jam and Taylor Swift are among the countless musicians who have sang the tune.

The globe’s obsession with the Disney movie won’t likely abate anytime soon. “Frozen” is going to begin airing on different Disney-owned channels in February while “Frozen 2” is still in the works.