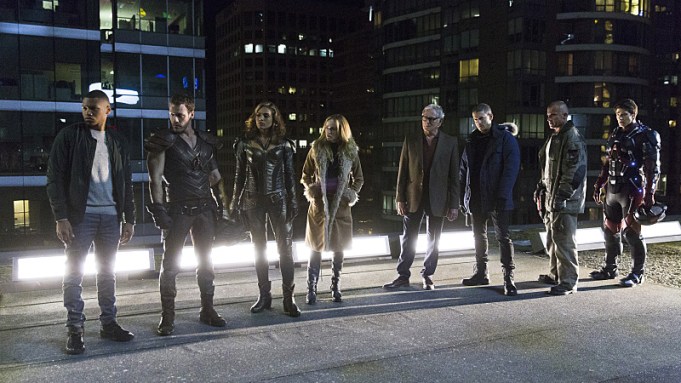 If you’re a fan of The CW’s “Arrow” or “The Flash,” you probably recognize most of the cast members populating their midseason spinoff series “DC’s Legends of Tomorrow,” but even if the heroes (and villains) are familiar, the stars promise that the show has plenty of new tricks to differentiate it from its predecessors.

“I did have to adjust,” admits Brandon Routh, who has played tech genius Ray Palmer (aka The Atom) on “Arrow” since Season 3. “Ray’s a little bit different [in ‘Legends’], he’s not commanding anything. It’s definitely different to sit back, and I feel myself in scenes going ‘this is different,’ because usually I was the one telling everyone what to do, in a nice way … It’s almost like Ray has to depend on people [now], which is a more vulnerable place to be.”

“The main question was, ‘is there a script? Is there something to read?’ And the answer was no,” Wentworth Miller laughs, recalling his early discussions with the producers before signing on to the series. “The answer was, ‘this is a leap of faith,’ and I was willing to take that leap because it’s [executive prodcer] Greg Berlanti. I saw what he did with ‘Arrow,’ saw what he did with ‘The Flash,’ saw that Victor Garber was on board. There were a lot of reasons to say yes.”

Miller has become a scene-stealer on “The Flash” as one of the show’s most formidable recurring foes, Captain Cold (aka Leonard Snart), and the actor was interested in the opportunity to explore new sides of the villain in the spinoff. “The enticement was, you’ve seen him as a spice character — what else is there? If we actually spent more time with Snart, what would we learn?” he offers. “That’s been interesting for me and the writers to explore, because he’s charismatic and edgy and mysterious and there’s the hint of menace; we don’t want that to go away by telling you too much – we don’t want that to dissipate, so how do we supplement it?”

While some of the team’s members are tempted by the offer of becoming a “legend” when time-travelling hero Rip Hunter (Arthur Darvill) comes to recruit them to save the future, that’s not the case for one character, Sara Lance (Caity Lotz), who was resurrected by “Arrow’s” mythical Lazarus Pit and is now trying to fight the violent bloodlust brought on by her brush with death in her new guise as White Canary.

“Sara’s not somebody who has a huge ego; it’s not about becoming a legend – for her it’s about finding a purpose for her life and somewhere she can feel like she belongs,” Lotz says, noting that while her character — who is openly bisexual — may find an intimate connection or two during her trip through time, the season is “not about love for her … It’s about Sara finding herself. She’s got her own issues and demons and things that she needs to deal with.”

Love is on the agenda for Ciara Renee’s Kendra Saunders (aka Hawkgirl), whether she likes it or not. As one half of a reincarnated couple destined to find each other in every generation, Kendra and her soulmate, Carter (Falk Hentschel) are also inexorably tied to Vandal Savage (Casper Crump), the villain of “Legends,” who was first introduced in the recent “Arrow” and “Flash” crossover event, in which he attempted to kill the Hawks to help fuel his immortality.

“Coming from the crossover into ‘Legends,’ she’s starting to accept more that this is a path she needs to follow, she can’t really get out of it,” Renee says of Kendra’s apparent destiny. “I think she’s excited that maybe there is a way to change this cycle that’s been happening for so long; maybe there is a chance to rewrite destiny. That’s at least what Rip Hunter is offering. So even if she still is reluctant to remember her past lives and to be a superhero, which wasn’t ever really her plan, I think she’s settling into it more because she’s realizing ‘okay, I’m in it now, this guy’s after me, no escape.’ We see a more accepting Kendra in ‘Legends.'”

Kendra will also experience some growing pains as she tries to acclimate to the superhero life, Renee says. “As far as where she stands in relation to the team, she’s a little bit of an outlier in a way, because this is all focused on her storyline and she’s the one who was like ‘I don’t wanna be a superhero, I don’t really know what I’m doing, why is this happening to me?’ Everyone else is like ‘alright, let’s do it.’”

Although we may see more familiar faces from the worlds of “Arrow” and “Flash” on “Legends,” don’t expect the time-hopping shenanigans to spill over onto the other series going forward. “Once ‘Legends’ is born in January, there’s really no intersection [with it] on the other shows,” executive producer Greg Berlanti recently told reporters. “‘Legends’ is kind of its own wacky, crazy kind of thing that allows for some fun surprises in terms of who may visit and how because they’re flying through the timeline and you’ll start to see more of that. But not on ‘Arrow’ or ‘Flash.’”

“DC’s Legends of Tomorrow” premieres Thursday, January 21 at 8 p.m. on The CW.