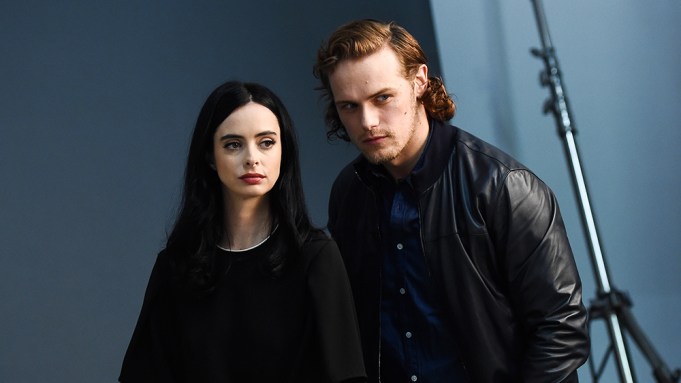 TV sex scenes might appear steamy to viewers, but the actors who perform them on-screen don’t always feel the heat. “Jessica Jones'” Krysten Ritter and “Outlander’s” Sam Heughan said there’s no pleasure in shooting sex scenes, while chatting for Variety and PBS’ “Actors on Actors” series.

“I don’t like doing sex scenes, but with Jessica, I always felt like the sex scenes came from such a place of character and strength so it always made sense to me,” said Ritter, who plays the title character on Netflix’s “Jessica Jones.”

“I never thought of them as being like anything that spectacular.”

Ritter said her father doesn’t watch the superhero series due to said scenes.

“Having everybody’s eyes on you, sometimes, it’s difficult,” Ritter continued. “There are days when that’s like, ‘Aww man, I wish I could just like disappear for a day.”‘

Heughan, who sat opposite Ritter, agreed the scenes can be “tough” and “so not sexy.”  But, like Ritter, he appreciates the value sex scenes add to “Outlander.”

“We always talk to the producers and the writers and work out how it moves the relationship forward or what it reveals about the character. But our show is definitely a central relationship and so we learn a lot about our characters through their sex life,” he said.

“We always approach it like a play,” he added. “You go through it and work out exactly what you want the audience to feel or see, and then you just have to literally block it out and it becomes so almost mechanical.”