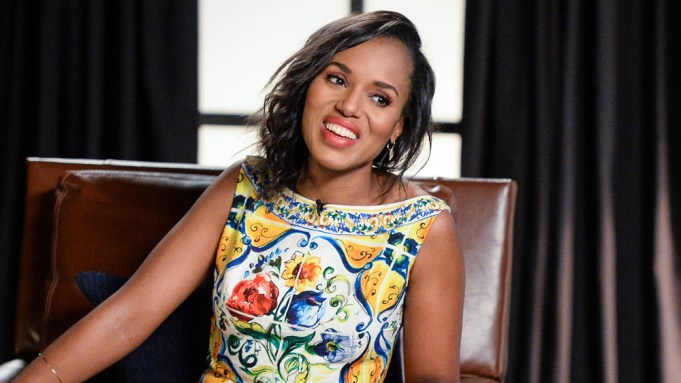 Hollywood is no stranger to stereotype casting. “Scandal’s” Kerry Washington and “Master of None” star and executive producer Aziz Ansari have come face to face with this reality on multiple occasions throughout their careers. The actors swapped nightmare stories during a sit-down for Variety‘s fourth season of “Actors on Actors.”

“Before ‘Scandal,’ I was actually cast in two other pilots. Both went to series, but I was fired and recast,” Washington said. “For both, it was because they wanted me to sound more ‘girlfriend,’ more like ‘hood,’ more ‘urban.'”

While Washington experienced the repercussions of not fitting a certain stereotype, she soon discovered that it wasn’t exclusive to racial cliches.

“I’ve had friends of mine say like they’re tired of ‘gayface’ and I was like, ‘What’s gayface?’ They were like, ‘It’s the gay version of blackface, like come in and be more effeminate,”‘ Washington said, recounting past conversations.

“It’s interesting; like every person that’s not a straight, white guy has their version of this,” Ansari said.

Ansari said he’s shown up to auditions only to find he got booked because the project was trying to cast a certain look.

“A lot of other minority actors have told me, ‘Oh, this so rings a bell’ when you go into an audition room and you see a bunch of people that look like you and you just start feeling like, ‘Oh I’m not here [for me], I’m here because I fit what looks like the person they want in here,”‘ Ansari said, referencing a “Master of None” episode — “Indians on TV” — where he addresses auditioning.

Ansari said as executive producer of “Master of None,” he has tried to bring authenticity to the characters he features on the Netflix show, allowing them to keep their own clothing styles and be themselves instead of becoming a character on a page.

“I feel like a lot of times people don’t do that and then you end up with other people’s perception of what certain people are like,” Ansari said.

“I definitely feel like I’m at that point where it’s nice to not have to sit at home and wait to be invited to the party, but to be creating work for yourself,” Washington added.

Watch the entire interview when the two-part fourth season premiere of “Variety Studio: Actors on Actors” airs June 12 and June 19 on PBS SoCal. Presented by Shopbop/East Dane, the episodes will also be available to stream on Variety.com.