Continue to Variety SKIP AD
You will be redirected back to your article in seconds
May 25, 2016 1:09pm PT

Kerry Washington and Aziz Ansari: ‘Every Industry Is So White,’ Not Just Hollywood 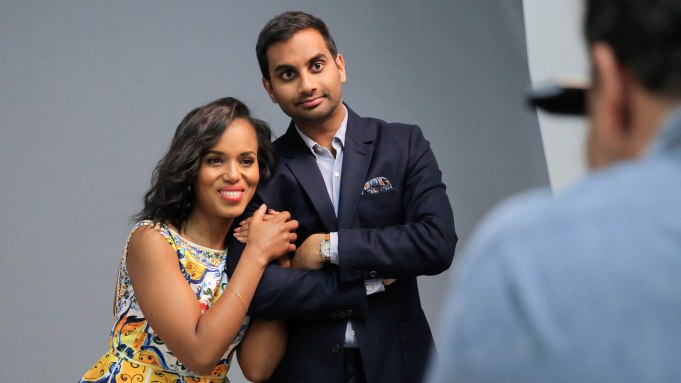 Kerry Washington and Aziz Ansari sat down for the fourth season of Variety’s and PBS’ Actors on Actors series and the two actors struggled to find why the TV industry has received so much praise for improvements in diversity.

“I feel like everybody’s talked so much about how there’s more diversity on TV than in film. I don’t understand why. Do you?” Washington, star of HBO’s “Confirmation” asked Ansari.

“I don’t know,” said Ansari. “If I had to guess I feel like there’s more diverse creators.”

“Our show, it’s Indian guy, Asian guy, so there’s going to be more Indian people, Asian people,” continued Ansari, who stars in “Master of None.” We have a diverse group of friends and we didn’t even really think about it when we were making the show that ‘oh this is diverse.’ We were just like this feels real.”‘

The lack of diversity in Hollywood became a heated topic during the 2015 Oscars and again during the 2016 Oscars. Celebrities and fans took to social media to voice their disapproval of the minimal presence of people of color in film and TV and actor/comedian Chris Rock used the Oscar stage to tackle the issue head on.

But, the lack of diversity in the entertainment industry is only a reflection of a much larger problem.

“I saw this chart in the New York Times about like decision makers -the gatekeepers in every single industry- and it was like all white people,” said Ansari.

“It came out after Oscars so white and I loved that they did it because there was all this attention on Hollywood but it was like no no no, every industry is so white,” Washington added.

While studio executives typically hold the power in diversifying cast in front and behind the camera, the two also discussed the importance of  actors using their own resources to improve and create opportunities for people of color.

“One thing I’ve thought about in going from season 1 to season 2 is now we’re in a position to help other people and in season 2 I’ve been like I gotta find -I gotta do just even more- and find even more actors of color and writers of color,” said Ansari.