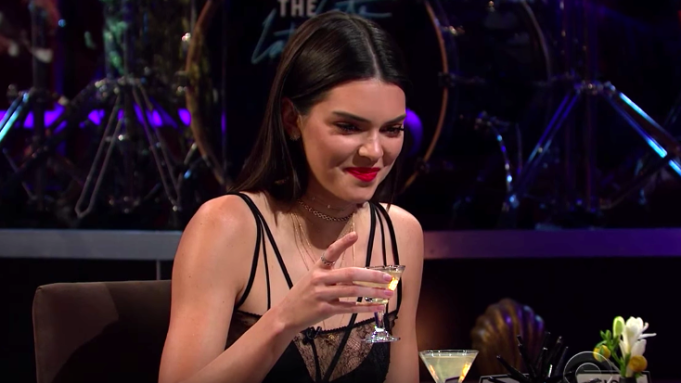 Kendall Jenner was James Corden’s latest victim on Wednesday on the “Late Late Show” sketch “Spill Your Guts or Fill Your Guts” in which players take turns either answering personal questions, or eating really gross food.

“Really gross” being an understatement — this time the revolting, revolving table featured menu items like fish eyes, bull penis and bird saliva. The last of which Jenner regrettably sipped instead of answering Corden’s question: “Who is your least favorite member of Taylor Swift’s squad?”

Jenner also chose to rank the baby names of her nieces and nephews instead of drinking a sardine smoothie, but drank clam juice instead of explaining why her sister, Kylie, appeared in paparazzi shots the same day that she called out sick from appearing on Corden’s show. “Drink the clam juice,” Kris Jenner called out from the audience.

Corden, meanwhile, inhaled cod sperm instead of choosing between his mom and dad, chewed bull penis instead of naming a guest that he would refuse to have back on his show and ate grasshoppers rather than throwing one of his band members under the bus.

Kendall Jenner also made headlines recently for quitting Instagram, something she said on “Ellen” she “didn’t expect” to be a news story. The Kardashian family’s press exposure has diminished following Kim being robbed in Paris in October.