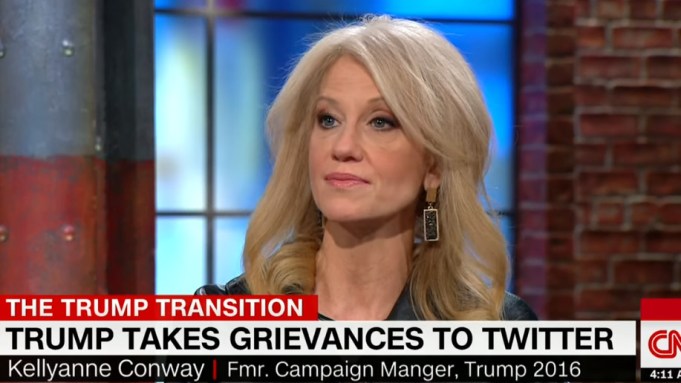 Kellyanne Conway, senior adviser to President-elect Donald Trump, made her case against CNN’s Chris Cuomo’s criticism of Trump’s tweets this past weekend that attacked both “Saturday Night Live” and “Hamilton.“

After Vice President-elect Mike Pence was booed during his attendance at Friday night’s “Hamilton,” Trump took to Twitter to demand an apology from the cast, claiming the Pence was “harassed.” On Sunday, Trump once again used Twitter as the outlet through which to criticize “SNL,” which he called “one-sided” and “biased.”

Cuomo condemned Trump’s tweets, posing several questions to Conway about the logic of his behavior.

“Why take up ‘SNL’? No president does that,” Cuomo asked. “Why waste the time, why distract?”

“But why do you care?” Conway fired back. “In other words, who is to say he can’t do that, make a comment, spend five minutes on the tweet to make the comment, and still be the president-elect?”

The two frequently spoke over each other, with Conway chastising Cuomo for spending time only discussing the negative tweets and not those addressing his meetings with a “diverse group of people.”

“He is also tweeting about the people he is meeting,” Conway added. “You’re talking about dozens and dozens of meetings. These are a diverse group of people who come from many different backgrounds who are all lending their advice, their counsel and experience to the president-elect and the vice president, and some of them who may end up in his cabinet.”