Kelly Ripa Says ‘Live’ Flap Was About ‘Respect in the Workplace’ 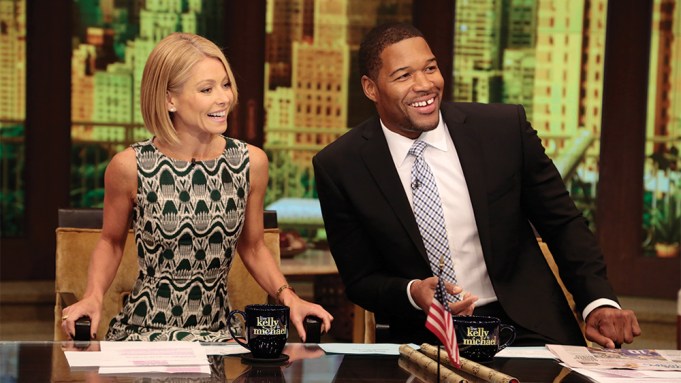 “Our long national nightmare is over,” Kelly Ripa quipped Tuesday in her much-anticipated return to “Live With Kelly and Michael” after four days off amid her anger over the decision to shift co-host Michael Strahan to “Good Morning America” full-time.

The host addressed head-on the source of her ire at being told of the decision after last Tuesday’s show, just a few minutes before it was announced to the press. The drama that ensued, with Ripa sitting out the show for two days before a previously planned vacation on Friday and Monday, “started a much greater conversation about communication and consideration and, most importantly, respect in the workplace,” she told viewers.

After 26 years of working for ABC in various capacities, Ripa asserted that she’d “earned the right” to have been treated with greater consideration in the Strahan shuffling process. She sat out last Wednesday and Thursday’s episodes for good reason: “I didn’t want to come out here and say something I might regret.”

Ripa’s roughly five-minute address to viewers amounted to a humbling moment for ABC execs, who by all accounts handled the decision to transition Strahan to “GMA” badly by keeping the news from Ripa until the last minute.

ABC insiders have laid the blame for that tactic on ABC News President James Goldston, and what is described as a myopic focus on shoring up “GMA” as its viewership dips against NBC’s newly energized “Today,” and ABC Owned Television Stations President Rebecca Campbell and WABC-TV President Dave Davis, where “Live” is produced. Insiders say one big reason for the bungle was the blurred lines of responsibility for managing the Strahan transition — and informing those affected — because “Live” and “GMA” originate from different ABC divisions.

Ripa said the flare-up over Strahan’s move after four successful years as “Live” co-host spurred apologies to her from ABC top brass, although she did not name names. In another unusual example of a host lifting the veil on behind-the-camera maneuvers, Ripa told viewers that execs pledged to her that “Live,” which airs on ABC O&O stations and is syndicated by Disney/ABC in the rest of the country, is a valued asset for the Mouse.

That was a direct reference to the speculation that ABC was looking to take over “Live’s” 9 a.m. time slot with a third hour of “GMA.” Knowledgable ABC sources have long denied that any such move was afoot — for a host of logistical and practical reasons — but the rumors nonetheless persist.

“The best thing to come out of all of this — our parent company has assured me that ‘Live’ is a priority,” Ripa said.  “There is a commitment to this show and the people that work here and, most importantly, to you the viewers who have watched us every day for 30 years.”

The torrent of media coverage of the Strahan move and Ripa’s no-show protests on April 20-21 made for much anticipation for her return on Tuesday. Wearing a sleek, red Roland Mouret jumpsuit, Ripa walked out on the set holding hands with Strahan. She addressed the audience standing up beside the desk and noted the awkwardness of the situation as the audience — and undoubtedly ABC execs — awaited her first words.

“I’m fairly certain there are trained professional snipers with tranquilizer darts (in the studio) in case I drift too far off message,” she joked. Ripa received a lengthy standing ovation from the audience. She thanked viewers for their “overwhelming” demonstrations of support “in this bizarre time.”

In closing, Ripa congratulated Strahan on his “tremendous opportunity” to move to “GMA,” where he has been a twice-weekly contributor for the past two years. “I couldn’t be prouder of you and everything we’ve accomplished together,” she said. Strahan gushed as he returned her compliment: “I’m so happy you’re back. You love this show, you love the fans, you love the staff. I love you. I’m so happy you’re here.”

Reflecting her earthy touch that has made her such a favorite with fans, Ripa added just before the conversation turned back to the usual breezy stuff of “Live”: “My dad, who was a bus driver for 30 years, thinks we’re all crazy.”

Now that the air has been cleared on-air, the focus of “Live” intrigue is on Ripa’s negotiations for a new contract as her current pact ends after the 2016-17 season. The events of the past week — bolstered by the comments she made in her return on Tuesday — amount to a windfall of leverage for Ripa’s reps at CAA.