Continue to Variety SKIP AD
You will be redirected back to your article in seconds
Sep 8, 2016 11:19am PT 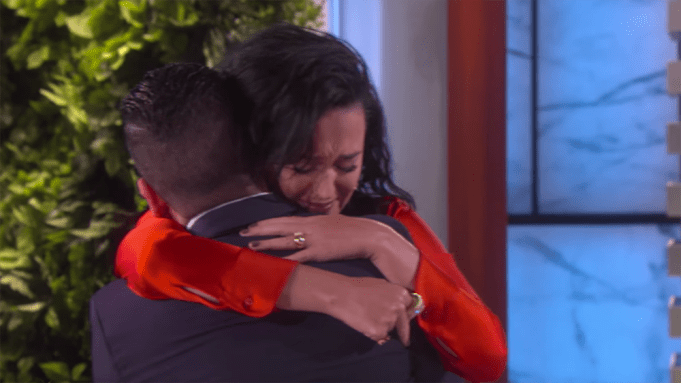 Tony Marrero, who survived the Pulse Nightclub mass shooting in Orlando, Fla. in June, appeared on “The Ellen DeGeneres Show” to discuss his recovery following the attack. Ellen DeGeneres surprised Marrero by bringing out Katy Perry, whose song “Rise” inspired him during his road to recovery.

Marrero, who was shot four times by gunman Omar Mateen, told DeGeneres on Thursday’s show that “Rise” kept him motivated during his months of recuperation. He noted that the song’s lyrics had a particularly profound affect on him.

“The lyrics to that song are so powerful,” Marrero said. “Every word in that song is just powerful. So I embraced it …”

DeGeneres then surprised Marrero, who has yet to meet Perry, by bringing out the pop star in an emotional embrace. Both Perry and Marrero were overcome with tears.

“I’m shaking right now,” Perry said. “We’re both electrified by each other, and so inspired.”

Marrero went on to thank Perry for serving as an inspiration while recovering from his injuries.

“I just want to say thank you for everything you do,” Marrero told Perry through tears. “Your lyrics to that song helped me from the day I was in the hospital all the way to now. Thank you.”

At the conclusion of the segment, Perry offered to pay for Marrero’s first year at film school.