Jon Stewart to Trump Supporters: ‘You Don’t Own America’ 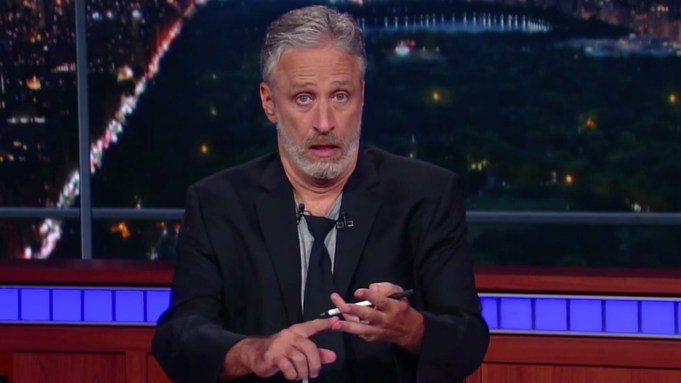 Jon Stewart addressed the nation Thursday night in one of his first political TV appearances since retiring from the “Daily Show” last year.

Joining his former colleague Stephen Colbert on CBS’ “Late Show,” Stewart reacted to Donald Trump’s speech at the Republican National Convention in a live segment that echoed his days behind the “Daily Show” desk.

He focused his attention to Fox News anchor Sean Hannity — who he dubbed “Lumpy” — for his hypocrisy in attacking President Obama for the same behavior and attributes that Trump now exhibits (“a thin-skinned narcissist with no government experience”).

“I’m sure it’s easy for people without ethics or principles to embrace someone who embodies everything they said they hated about the previous president for the past eight years,” said Stewart.

After he drops an expletive in describing Lumpy and his Fox News cohorts, Colbert pops up behind the desk to remind him they’re live. “I’ve never been on a show with stakes before,” quips Stewart.

Stewart’s message for the Trump supporters:  “This country isn’t yours. You don’t own it!” he said. “You don’t own patriotism, you don’t own Christianity. You sure as hell don’t own respect for military, police and firefighters.”

And before Stewart can end with another expletive-filled attack on “Lumpy” and co., Colbert interrupts him again with his air horn.