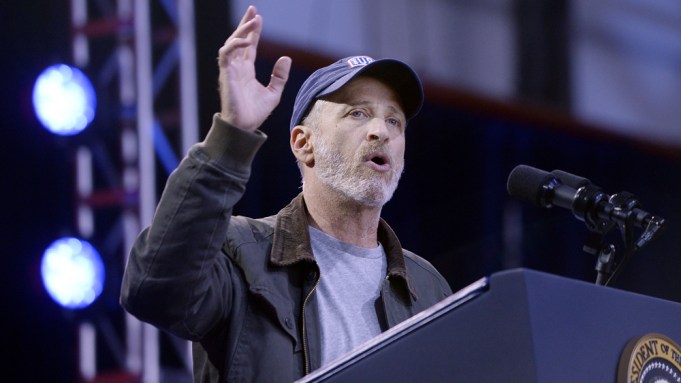 Jon Stewart has remained quiet during the 2016 election cycle, but on Thursday the comedian briefly came out of retirement to take a few quick jabs at presumptive GOP presidential nominee Donald Trump.

Speaking at a 75th anniversary event for the USO at Joint Base Andrews in Maryland, Stewart, who looked gaunt and burley with a silver beard, wished the military a happy Cinco De Mayo, joking: “May is Military appreciation month and Cinco de Mayo is the day that Americans get hammered to support the Mexican military.”

“[Joe Biden is] a guy who’s unpredictable, he’ll say whatever he kind of thinks of, whatever comes to his mind. Sometimes you might think to yourself, ‘That sounds crazy’ or ‘Man, that is crazy.’ And who would have thought, now, that gets you the Republican nomination?”

Stewart, who has kept a low profile since leaving “The Daily Show,” may be on HBO in time to cover the 2016 election, as part of his new four-year contract with the network. On Thursday afternoon, HBO CEO Richard Plepler said he was “hopeful” viewers would see the comedian on air again soon.