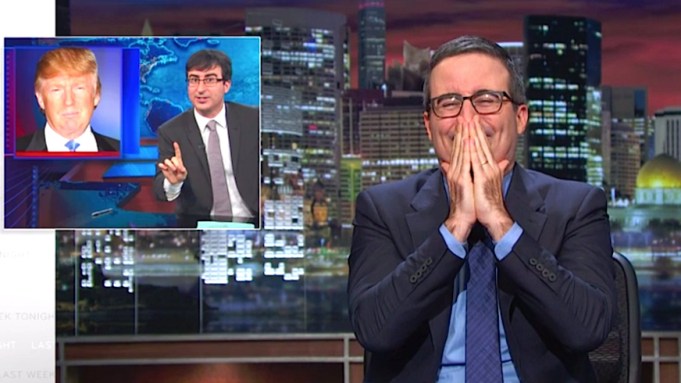 John Oliver once rooted for Donald Trump to run for president.

The “Last Week Tonight” host ate crow on Sunday’s episode of his HBO late-night talk show, revealing that he “thought a Trump candidacy would be funny” during his “Daily Show” days.

“It is frankly hard to believe that there was a time when people thought a Trump candidacy would be funny,” he said. “But there was such a time. Because as you may remember, three years ago I guest-hosted ‘The Daily Show,’ and well, there is something you should see.”

The comedian then played a 2013 clip from the Comedy Central show in which he urged Trump to run for the nation’s highest office in response to an MSNBC report that the reality TV star was considering a 2016 bid.

“Do it. Do it,” Oliver said in the footage. “I will personally write you a campaign check now, on behalf of this country, which does not want you to be president, but which badly wants you to run.”

“In my defense, I have no defense for that and was hoping to think of one before finishing this sentence, and oh s—, it’s over,” he teased amid jeers from the audience.

“I want to believe that America will reject Donald Trump, that our innate sense of decency will kick in like some sort of moral auto-pilot, but I have been spectacularly wrong before,” he added before digging up another regrettable “Daily Show” clip.

Oliver then offered a mea culpa for saying eight years ago that the Chicago Cubs would never win a World Series in order to stress that anything can happen, in an effort to encourage viewers to vote.

“That clearly shows no outcome is certain, so if you are thinking you don’t have to show up to vote on Tuesday because there is no way the impossible could happen, take it from somebody who has learned from painful experience: You are wrong about that,” he said.