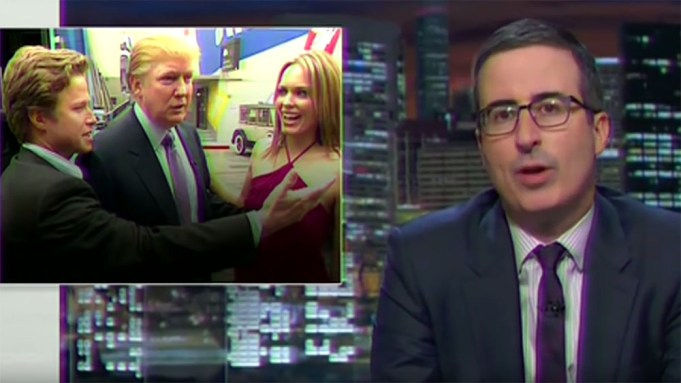 John Oliver has a thing or two to say about the now infamous 2005 tape featuring Donald Trump and Billy Bush’s lewd conversation about women.

The “Last Week Tonight” host spent a majority of the first segment of his show on Sunday slamming both Trump and Bush for their comments in the leaked video, in which Trump refers to grabbing women “by the p—y.”

“Yes, that is audio of Donald Trump in 2005 telling a giggling Billy Bush that one of the perks of fame is that he can grab women’s genitalia without permission,” Oliver said.

Oliver went on to say that though he thought Trump couldn’t possibly sink any lower, Trump surpassed Oliver’s expectations through the release of the tape.

“Let me just remind you that last Sunday, I told you if you looked above the clouds, you would see rock bottom,” recalled Oliver. “But if you look up there now, which is way, way up there, all the way up high, you will see, right up in the distance, where we were this time last week. Because since then, we have sunk so low, we are breaking through the earth’s crust, where drowning in boiling magma will come a sweet, sweet relief.”

The English host went on to remark, “It is gross enough that he is serving as Donald Trump’s hug pimp,” said Oliver. “But let’s not gloss over the fact that he just said ‘how about a little hug for the “bushy?” A phrase that, if it is not already, should be a felony offense in all 50 states.”

Oliver also stated that early voting has begun, and many have already cast their vote in favor of Trump. Regardless of the many Republicans that have already un-endorsed Trump, a Republican victory may still be a possibility.

“This is happening, and in a way, perhaps we have been always heading towards this historic moment,” said Oliver. “The first female presidential nominee versus the human embodiment of every backwards condescending ‘Mad Men’-esque boys club attitude that has ever existed, rolled into one giant salivating dick-size-referencing, p—y-grabbing warthog in a red power tie.”

Oliver ended the segment by comparing the election to an old school video game.

“I’ll put it this way — if American democracy is a computer game, and Hillary is completing woman’s 100-year quest to get into the Oval Office, it kind of makes sense that this would be the final boss,” Oliver said to an animated image of Trump as a monster.