John Legend Slams ‘Racist’ and ‘Divisive’ Donald Trump: ‘We, As a Nation, Can’t Go Back To a Dark Place’ 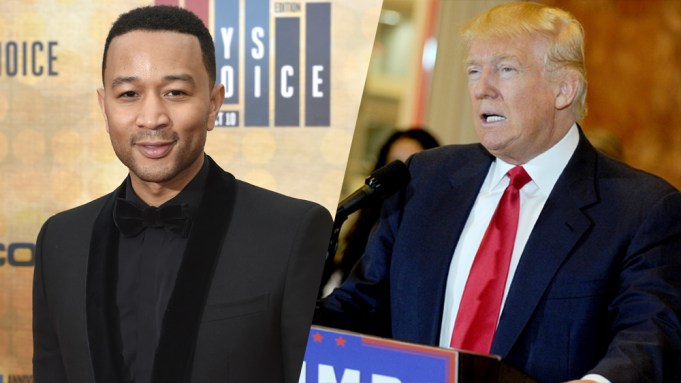 John Legend is not one to shy away from vocalizing his opinion about Donald Trump.

The Grammy and Oscar-winning musician and “Underground” executive producer has lashed out at the GOP nominee on social media, previously engaging in a Twitter feud with Trump’s son — and today, Legend slammed the presidential hopeful again.

“We are in a moment now where we have a major candidate for office that is being very racist and divisive. I feel the need to call that out all the time because I don’t want us to feel like it’s impossible for our nation to go back to another dark place,” Legend said Tuesday afternoon at Variety’s TV Summit at the Four Seasons in Beverly Hills, Calif., where he discussed his WGN America series “Underground,” a period drama about the Underground Railroad.

“We, as a nation, can’t go back to a dark place, and it could happen if we let the wrong person into office and impose the wrong regime on this country,” Legend said. Referring to the time of slavery, as covered in “Underground,” he added, “I’m sure people in 1800’s didn’t think they were evil people, but they allowed an evil institution to last for quite a long time.”

Legends continued, “We, as people who believe in equality and diversity and believe that every human being in this life matters, we need to be vigilant in making sure that we don’t elect leaders who are contradicting that belief.”

During the keynote discussion, Legend was asked by moderator Variety’s Debra Birnbaum about being so vocal on Twitter.

“Some people want me to shut up and sing…I can’t just sit by and watch,” he said about his haters. Referring to Twitter users with no profile photo, Legend cracked, “Most of them are eggs on Twitter. Or they have a Trump icon on Twitter.”

“I can’t sit by and let this stuff happen without trying to influence people,” Legend said. “It’s worth it to me. “