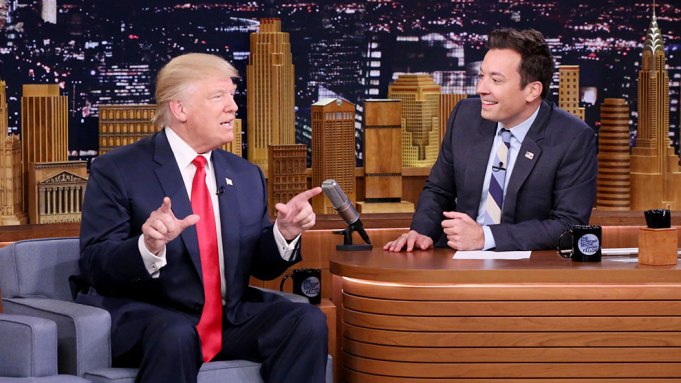 Does Jimmy Fallon have an obligation to grill politicians on his show? Not really, says “The Tonight Show” host.

After Fallon’s softball interview of Republican presidential nominee Donald Trump last week, critics and Twitter users slammed the host for not bringing up his divisive rhetoric, or asking about controversial subjects like his birther claims (which Trump has since backtracked on) against President Obama. Fallon instead rubbed Trump’s head, joking about his hair.

Asked about the interview by TMZ after the Emmys on Sunday night, Fallon shot back, “Have you seen my show? I’m never too hard on anyone”

“We’ll have Hillary [Clinton] on tomorrow, and we’ll do something fun with her too,” he added, also calling Trump a “good sport.”

Dodging the question about which candidate he thought would better defend the state of New York, Fallon said, “Just get out there and vote. Everyone just vote, vote, vote. Register; vote. Vote, vote vote.”

While Fallon does have a non-confrontational brand, the backlash was harsh: he saw an increase of more than 2000% in Twitter hate after the interview. Of the controversy, Variety senior editor Ted Johnson wrote, “they are not journalists, but they are giving campaigns valuable exposure. “

Fallon’s interview with Clinton, which was taped on Friday, will air Monday night.