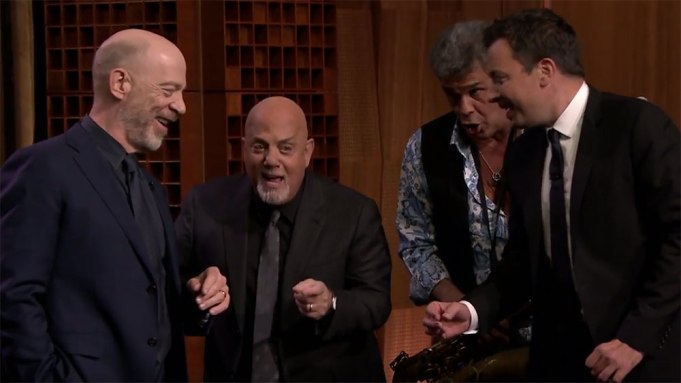 Commercial breaks can feel like a long time for viewers, but not for Jimmy Fallon. During a commercial break while filming local promos Tuesday for NBC’s “The Tonight Show With Jimmy Fallon,” Billy Joel, J.K. Simmons and Fallon broke into an unrehearsed doo-wop performance of “The Longest Time.”

With Joel singing the first verse, Fallon, Simmons and Joel’s band took on the melody, snapping to the beat. Fallon belted the second verse with cheers from the crowd.

This isn’t the first time Fallon and Joel have performed on “The Tonight Show” together. Last year, the pair broke into a rendition of “The Lion Sleeps Tonight” when Joel appeared as a guest on the show in March. With some assistance from an iPad app called the Loopy HD, Fallon and Joel sang in four-part harmony by looping their voices.

While Joel is no stranger to “The Tonight Show,” he really knows the ropes of Madison Square Garden. Thursday marks the singer’s 71st all-time performance at the Garden. Joel is the first artist ever to hold the Garden’s record for both longest run of any artist and largest number of performances by any artist, as he became the Garden’s first-ever music franchise in December 2013. Since January 2014, he has played one show per month at the Garden through the Time Warner Cable Concert Series, and Thursday’s performance will mark his 25th consecutive show.