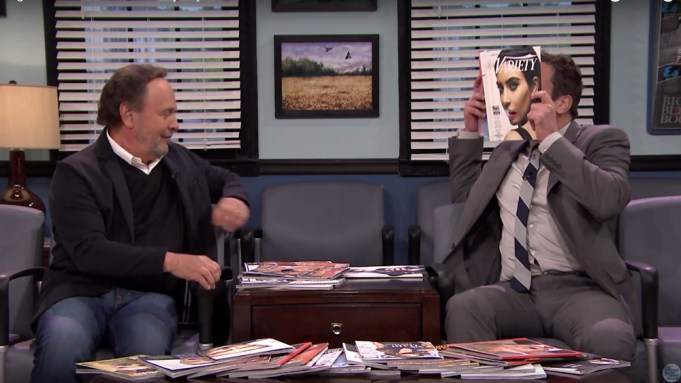 The comedians used magazines, including two Variety covers, to do impressions of celebrities Friday on “The Tonight Show.” Fallon held up Variety‘s April 21, 2015, Power of Women New York cover of Kim Kardashian and did his best high-pitched Valley Girl accent. He then spoofed Sylvester Stallone using our Jan. 5 cover of the “Creed” star, mumbling a string of incoherent words.

However, the highlights of the sketch were their impersonations of presidential candidates Bernie Sanders and Donald Trump.

“I am here with a urinary tract infection. Right now I am feeling the burn,” Crystal said, holding up Rolling Stone with the Democratic candidate’s lips cut out of the magazine.

Fallon, meanwhile, took aim at the size of Trump’s member, something the presumptive GOP nominee mentioned at a debate.

“I’m getting a penis reduction surgery, and it’s gonna be beautiful,” Fallon joked. “Right now it’s huge, and I have to reduce it. It’s just what I have to do.”