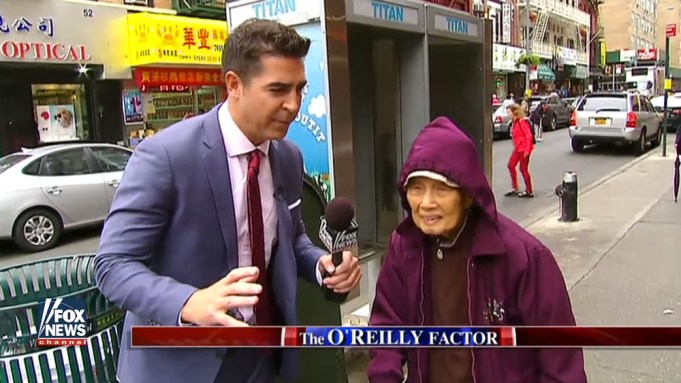 Fox News host Jesse Watters said he had “regret” Wednesday over a segment on “The O’Reilly Factor” that drew accusations of racism due to its portrayal of Chinese-Americans.

“My man-on-the-street interviews are meant to be taken as tongue-in-cheek and I regret if anyone found offense,” he wrote in the non-apology. “As a political humorist, the Chinatown segment was intended to be a light piece, as all Watters World segments are.”

My man-on-the-street interviews are meant to be taken as tongue-in-cheek and I regret if anyone found offense.

As a political humorist, the Chinatown segment was intended to be a light piece, as all Watters World segments are.

In the “Watter’s World” segment, the host was sent to Chinatown in New York to “find out what folks think about the 2016 election” after China was mentioned 12 times during the first presidential debate.

Watters asked random passers by political questions such as “Do you like Donald Trump?” and “Who you going to vote for?” but also other questions like “Is it the year of the dragon…rabbit?” and “Do they call Chinese food in China just food?”

Towards the end of the segment, Watters abandons questioning around the presidential election and instead visits a karate dojo, swings some nunchuks and receives a foot massage.

Many Asian-Americans reacted with disgust to the segment, and the Asian American Journalists Association (AAJA) has demanded an apology, calling it “rude, offensive, mocking, derogatory and damaging.”

“We should be far beyond tired, racist stereotypes and targeting an ethnic group for humiliation and objectification on the basis of their race. Sadly, Fox News proves it has a long way to go in reporting on communities of color in a respectful and fair manner,” AAJA president Paul Cheung said.

Even after Watters attempted to smooth things over, the AAJA issued another statement. “It’s one thing to be ‘tongue-in-cheek,'” the statement reads. “It is something entirely different to hide behind the guise of political humor while using racial stereotypes.”

New York Mayor Bill de Blasio also weighed in on Twitter, writing, “The vile, racist behavior of Fox’s Jesse Watters in Chinatown has no place in our city. FoxNews – keep this guy off TV.”

Fox News labelled the segment “hilarious” on its website and Bill O’Reilly defended the bit, seeming to know that it would draw controversy.