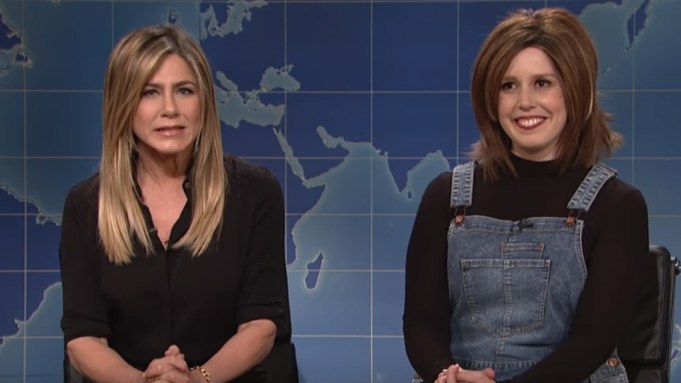 This week’s “Saturday Night Live” featured a battle of dueling Rachels, as Vanessa Bayer brought back her impression of Jennifer Aniston’s “Friends” character to the Weekend Update desk. But Bayer, clad in a wig of Rachel’s iconic layered hairstyle and ’90s-certified overalls, probably didn’t expect Rachel herself to show up.

“What are you doing here?” asked Bayer as Aniston made a surprise appearance on the segment.

“For the last 12 days you’ve been texting me every day to come and visit you,” Aniston, who stars with Bayer in the upcoming comedy “Office Christmas Party,” said. “Listen, honey, I know you love ‘Friends’ and we had such a great time making our movie together, but you gotta really try to stop texting me every day.”

“‘Friends’ was like, five million and five years ago, so I think we’ve just gotta move on,” she added.

Aniston went on to critique Bayer’s take on the “Friends” character, even doing her own impression of Bayer’s Rachel impression.