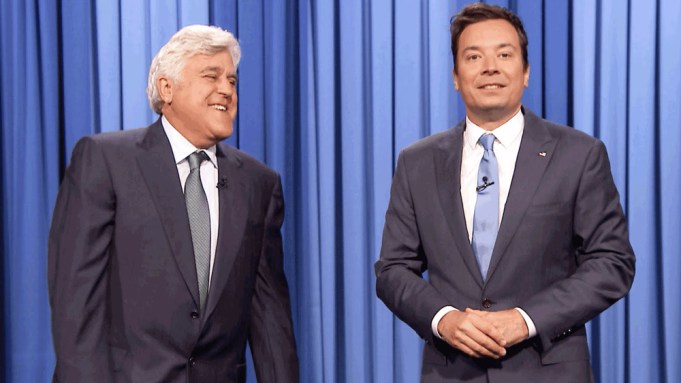 After Fallon said he “might’ve pulled something [in his leg],” he tagged in Leno, who left nothing untouched regarding the 2016 election cycle.

“Hillary Clinton says she is the most transparent candidate in modern history. How many can see right through her?” Leno joked.

He didn’t take it easy on Clinton’s opponent, either.

“I’ve been enjoying Donald Trump’s new reality show, ‘The Amazing Racist,'” he said about the presumptive GOP presidential nominee. “Trump is still refusing to take back what he said about the judge with the Mexican surname. In fact, Trump is now threatening to have the judge deported back to Indiana.”

He continued, “According to a political science professor, all of Donald Trump’s speeches are given at a fifth grade level or below. And today Trump said the professor who did the study was ‘doody head.'”

He even had a few words for Bernie Sanders, mocking the Vermont senator’s age. “Bernie says he is the most anti-fossil fuel of any of the candidates. Well, of course he is. That’s because he’s the only candidate who is an actual fossil,” Leno joked.