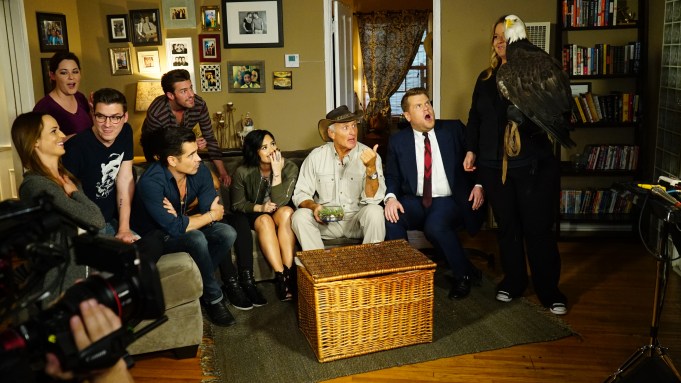 One year ago, James Corden debuted as the host of “The Late Late Show” on CBS. So to mark the occasion, he decided to shake things up by moving out of the studio — and into a stranger’s home. Just like he did last year, when he aired his show from Tommy’s house during his second week as host, this year the lucky winner was a woman named Natalie.

Along with his crew, Corden went door-to-door on the streets of Los Angeles, just blocks from his regular studio home in Television City, to find someone willing to let him broadcast the show from their living room.

“To celebrate, we’re going to take the show to the people,” said Corden. “This might not work.”

Indeed, he didn’t have much luck at first: He rejected the first house he came to because it had too much kid stuff. At the next house, it took a few minutes for the homeowner to finally come to the door, and when she did, she couldn’t have been less excited at the prospect of letting him inside. “This is the worst show in the world,” jokes Corden as he wandered the streets. “Can you imagine if we just do this for an hour?”

Finally he found a house with the lights on — and some very willing homeowners in Natalie, Taylor, Melodie and Adam, who could hardly believe who was at their door. “Are we doing carpool karaoke?” they asked.

Alas, no, but with a little juggling of the furniture (“I don’t even recognize my house,” said Natalie), Corden and co. put together a cleverly modified “Late Late Show,” complete with an opening monologue, kazoo-toting bandleader Reggie Watts, and a lineup of celebrity guests.

Corden promised at the top of the show that the housemates didn’t know he was coming, but he certainly lucked out. The foursome were only too happy to play along with the host, eagerly chatting about their jobs and their living situation — and nearly leapt off the couch when Corden offered to get ordained so he can marry Adam and Taylor, who are engaged.

“This is already the best house we could ever do it in,” said Corden, as he grabbed a slice of pizza. “We’re going to need more chickens,” he joked, as he poked around the chicken wings roasting in the oven.

Corden proved to not exactly be the best house guest (message to Natalie: check the cupboard for stray tea bags), but his celebrity guests were far more generous. Colin Farrell arrived with a basket of Irish foods, and Wanda Sykes followed with a pineapple. “You can never have enough pineapples,” she joked. Demi Lovato showed up empty-handed, but she did perform her new single “Stone Cold” in their hallway, so that’s enough of a gift. And Jack Hanna brought his usual array of eclectic animals, including a skunk, which the housemates, to their credit, didn’t freak out about.

But the highlight of the show was certainly the impromptu game of “hide and seek,” where Corden searched for the guests, who wandered the house for hiding spaces. Sykes decided to hide in plain sight on Watts’ stool. Once he finally spotted her, having walked past her twice, he cracked up, unleashing that famous giggle. “That’s a little bit racist,” teased Sykes.

Poor Farrell was the last one to be found. “It’s not as much fun winning,” he said. “When you win, you feel unloved.”