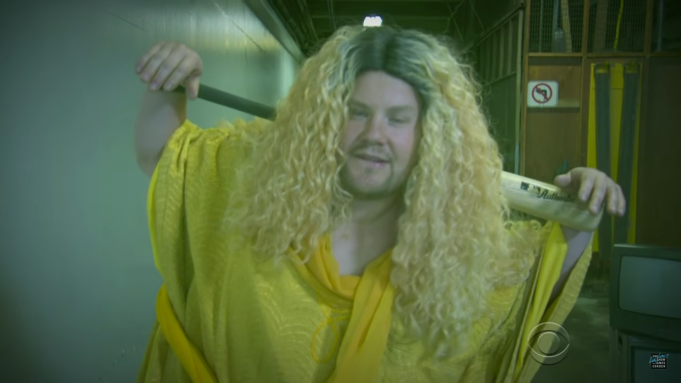 “Lemonjames: A Visual Monologue” was an elaborate spoof of the hourlong film companion to Beyonce’s latest “visual album” that premiered Saturday night on HBO and has had the Internet abuzz ever since.

Corden’s rendition was detailed down to the whispered voice-over and surrealist imagery, including a shot of Corden in a bra and panties and title cards indicating different themes. In Corden’s case, the title cards included “Monologue” and “Trump Joke” rather than Beyonce’s “Anger” and “Apathy.”

Corden zeroed in on one of “Lemonade’s” most talked-about moments, Beyonce’s reference to “Becky with the good hair.” That line has been widely interpreted as a reference to a woman that may have had a romantic relationship with Beyonce’s husband, music mogul Jay Z.

In Corden’s case, the line is directed at one of his late-night TV rivals: “Does that make you laugh like Jimmy with the good hair?”