Watch: ‘How To Get Away With Murder’ Season 2 Midseason Premiere Teaser 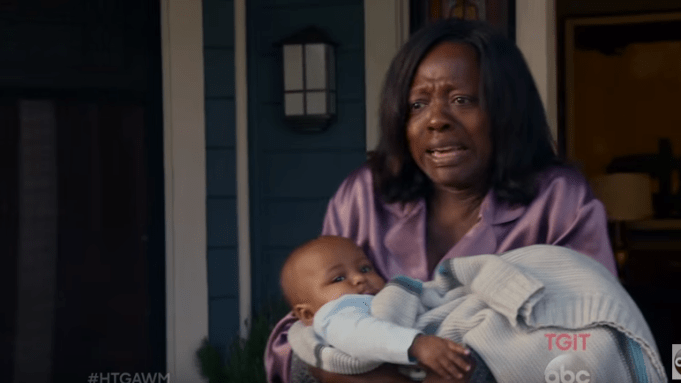 When the second season of “How To Get Away With Murder” returns, there’s a baby on board.

In the first full teaser for the Season 2 midseason premiere, Annalise Keating (Viola Davis) is seen standing on her porch holding a baby, yelling, “I can’t!”

While the baby storyline remains a mystery, one thing is clear: there’s going be a lot of fallout, following Wes (Alfred Enoch) shooting Professor Keating at the end of the last episode. In the new video, Laurel (Karla Souza) is seen at the hospital where Annalise is in a hospital bed and the footage shows glimpses of the rest of the Keating Five looking quite concerned.

Also in the trailer: someone is trying to drug someone (see: mysterious powder being poured onto ice cream in the video above), and Nate (Billy Brown) asks Annalise, “Do you want to die?”

After the Season 2 midseason finale last year when Wes was revealed to be Annalise’s shooter, Enoch told Variety to expect much much more complications in the new episodes.

“There’s an intimacy between them, which complicates the issue with him shooting her and trying to kill her, which obviously is why the betrayal feels so stark and so painful,” Enoch said. “It’s a very complicated relationship because to some degree, he knows he can’t trust her, but I don’t think he would have ever suspected that — even though he’s been suspecting her throughout all the season.”

But, will the rest of the Keating Five turn on Wes for pulling the trigger on Annalise? “I wouldn’t want to speak about them and their characters! I’m going to steer to the safe side of that question,” he teased.

“How To Get Away With Murder” returns Feb. 11 at 10 p.m., following the “TGIT” premieres of “Grey’s Anatomy” and “Scandal.” To watch the new trailers for those two shows, click here and here.