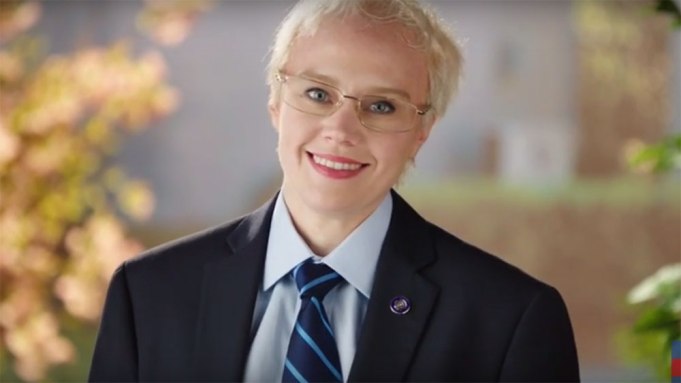 There’s little denying Bernie Sanders’ appeal with young voters — and his Democratic rival Hillary Clinton wants to get in on the action too.

This weekend’s “Saturday Night Live” spoofed Clinton’s struggle with a mock campaign ad, where the former secretary of state slowly transforms into the Vermont senator.

Kate McKinnon brought out her Clinton impression for the sketch, which saw Clinton acknowledge that there are “so many” young people voting in this election. “Luckily, I, Hilary Clinton, share all of your exact, same beliefs. And I always have,” she says.

McKinnon goes on to take aim at the wealthy, all the while progressing into Sanders’ Brooklyn accent.

“I’ve always said that, ever since I was a young boy growing up in Brooklyn,” she says.

By the end of the sketch, the transformation is less than subtle. McKinnon dons a suit, a white wig and glasses to look a lot like Sanders.

“I’m whoever you want me to be and I approve this message. I’m trying here, guys,” she says, exasperated.

The ad ends by saying “Feel the Bern for Her,” a mixture of mantras from hers and Sanders’ campaigns. Clinton has been slammed in recent weeks for appearing to move further to the left, which critics say is an attempt to lure younger voters.