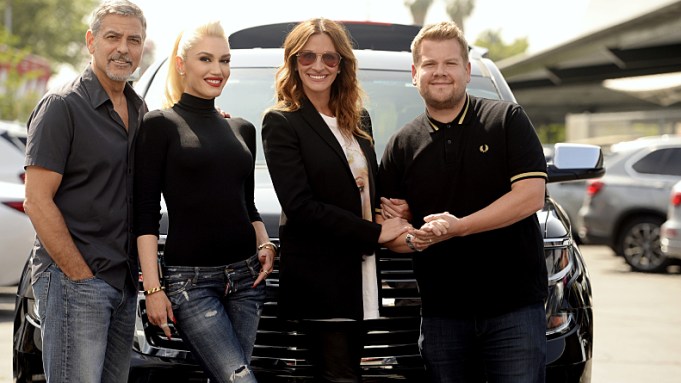 Gwen Stefani joined James Corden for another installment of “The Late Late Show” host’s Carpool Karaoke on Wednesday night — and they enlisted a couple of friends to come along for the ride.

After running through some of Stefani’s greatest hits — including No Doubt’s “Don’t Speak” and “The Voice” coach’s solo songs “Rich Girls” and “Sweet Escape” — the duo passed the time by discussing Stefani’s favorite emojis and romance with “Voice” co-star Blake Shelton, before making a pit-stop to pick up two more passengers.

Upon discovering that they needed four people to use the carpool lane, Corden drafted George Clooney and his “Money Monster” co-star Julia Roberts to fill the quota — leading to raucous rendition of Stefani’s “Hollaback Girl,” followed by a deep philosophical debate about the meaning of the song.

“It’s your interpretation of the song; I don’t want to project what I thought onto you,” Stefani insisted.

“It would help to know what you thought,” Clooney deadpanned in response.

After sharing their mutual admiration for each other’s past work, the foursome launched into a performance of Queen’s “We Are The Champions,” and somehow still managed to get Corden to work on time. Will the quartet’s combined star power be enough to surpass the viewership record set by Corden and Adele’s Carpool Karaoke segment, which currently has over 100 million views? Time will tell.

Watch the entire video of Stefani, Corden, Clooney and Roberts rocking out above.