‘Grey’s Anatomy’: Are April & Jackson Getting Divorced? ‘You Will Know Their Marital Status by End of Episode’ 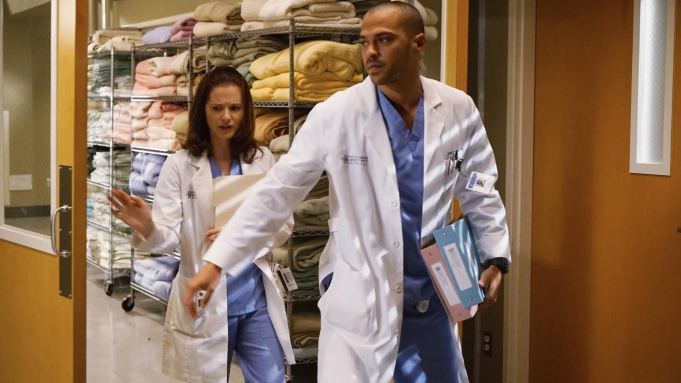 This week’s “Grey’s Anatomy” departs from the show’s normal course with a special episode dedicated solely to the relationship between April (Sarah Drew) and Jackson (Jesse Williams).

The full hour will be packed with flashbacks, filling in loopholes of the troubled couple’s 12-year romance from the time they first met at Mercy West to their wedding — yes, you will see the wedding — to April leaving Jackson after they tragically lost their baby.

By the end of the episode, viewers will find out what Jackson was going to say to April in the recent midseason finale and their relationship status will be revealed. You can watch an exclusive sneak peek from the episode, titled “Unbreak My Heart,” above.

“What I can say is that you will know their marital status by the end of the episode,” Drew tells Variety. “There will be some semblance of closure to some degree — ish. There’s a big ish there!”

Below, Drew tells Variety more details about the flashback-filled episode, plus, who will return from the dead?

What was your reaction when you found out you and Jesse would get to do this special episode?

I was over the moon. We’ve had a lot of time jumps over the last couple of years, so it was so exciting to get the opportunity to go back and do some of the stuff that we hadn’t seen. Shonda [Rhimes] pulled me and Jesse over at the end of a table read and said, “You guys are going to be working the hours of the crew. You’re going to be in every scene.” I’m so excited to get that trust to do an entire episode.

The episode will fill in a lot of blanks through flashbacks. What was your favorite moment to relive?

We’ve got four little scenes from our elopement from the moment we agree we’re going to get married all the way until our actual wedding, so you actually get to see our wedding and that’s really sweet and really fun and those scenes are so delightful. Those are my favorite things. But then it was also really fun to go all the way back to Mercy West and see them meet each other for the first time.

What will viewers learn from the flashbacks?

I think what you’re going to see are a bunch of misses of the two of them trying to be there for one another, but missing each other, which I think happens a lot in relationships, actually — you make assumptions because you have not caught whatever love they’re trying to give. We also get a deeper window into why she had to leave, what kind of state she was in, why the time over there [the army] really healed her. You get some more insight into all of that, but it’s hard — she needed to go, but her going caused him a lot of pain. It’s a hard situation.

What there anything that you learned about April or Jackson from the flashbacks that surprised you?

I guess, but it all made so much sense to me because I do a lot of imaginative work to fill in the blanks for myself to create the fullness of who this person is, and everything is in line with everything I imagined of who she was and who they are. You get more insight into their differences.

We do get to see Robert Baker. He makes an appearance, which is really fun. It was really, really fun to get to hang out for him for that scene and go back in time and remember what that was like.

And I’m assuming Catherine Avery (Debbie Allen) will make an appearance as well?

Yes, she is. She is in a scene with Jackson. During my time away, she shows up.