‘Gotham’ Sneak Peek: Jim Gordon is on the Warparth 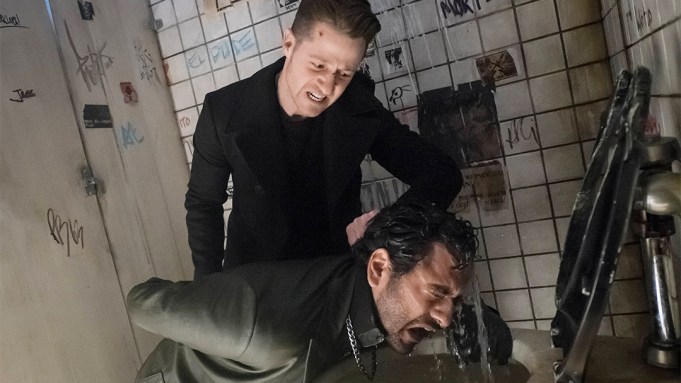 “Gotham’s” Jim Gordon (Ben McKenzie) may have been cleared of his alleged crimes in the last installment, but he’s apparently in no rush to return to the GCPD as he attempts to make good on his promise to Bruce Wayne (David Mazouz) and track down the person responsible for killing Bruce’s parents.

In Variety‘s exclusive sneak peek from the April 18 episode, titled “Pinewood,” Jim’s former partner, Harvey Bullock (Donal Logue), urges Jim to return to work, so that he’ll have the police force’s resources at his disposal. Unfortunately for Gotham’s criminal element, Jim’s not opposed to working outside the law in his search for the truth — especially if it means keeping Captain Barnes (Michael Chiklis) in the dark about what he’s up to.

Elsewhere in the episode, after leaving Arkham Asylum, Barbara (Erin Richards) attempts to make amends with Jim, who probably won’t be too pleased to see her. Then, Bruce and Alfred (Sean Pertwee) track down one of Thomas Wayne’s former friends from Project Chimera, but Hugo Strange (B.D. Wong) disrupts their plans.

“Gotham” was renewed for Season 3 last month, while another DC Comics-inspired Fox show, “Lucifer,” was recently given a second season pickup along with procedural “Rosewood.”