Continue to Variety SKIP AD
You will be redirected back to your article in seconds
Jul 23, 2016 5:08pm PT 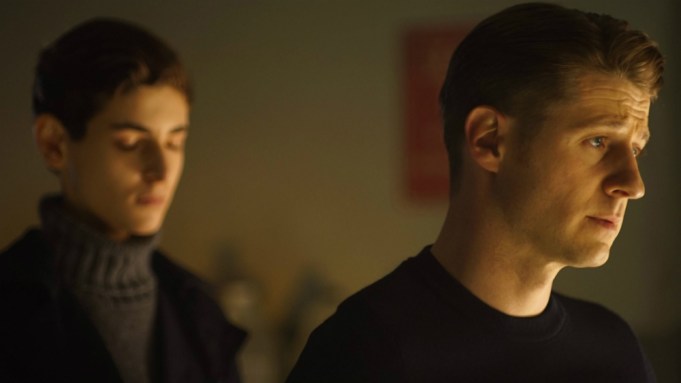 When “Gotham” Season 3 debuts in September, six months will have passed since the Season 2 finale, which saw the inhabitants of Indian Hill escape into the city. At the show’s Comic-Con panel on Saturday, star Ben McKenzie promised that Hugo Strange’s monsters will be “causing anarchy” when we pick up, and that we’ll find Jim Gordon in a very “dynamic” place in the new season, with the future Commissioner working as a “bounty hunter, taking out the monsters and getting paid.”

Meanwhile, his former paramour Lee Thompkins has been busy rebuilding her life following Jim’s arrest and the loss of their baby last season. “It’s not what she’s been up to, it’s who,” star Morena Baccarin teased, admitting that we’ll see Lee with a new love interest next season. “She’s had to piece herself back together.”

McKenzie admitted that Jim and Lee’s “road will be long and winding” before they get back together.

The Indian Hill monsters come in many forms, but the final moments of the Season 2 finale revealed one escapee who looked suspiciously like Bruce Wayne — albeit with a rockstar wig. “You can’t have too many Bruce Waynes,” executive producer John Stephens laughed. “The character comes in perhaps not knowing what he’s there for, but he has a mission and it becomes clear to him over the course of the season … it will have a huge impact on Bruce’s life and Selina’s as well.”

Season 3 will also introduce an adult version of Poison Ivy, and Camren Bicondova previewed that the dynamic between Ivy and Selina will shift with Ivy’s evolution. “The roles will change, from Ivy’s perspective – it’s not that Selina looked down on Ivy, but Selina’s older than her; she feels this older sister connection to Ivy. So when the new Ivy arrives, she’s older than Selina, and I don’t think it’s going to go well for Selina.”

The stars promised that the burgeoning bromance between Robin Lord Taylor’s Penguin and Corey Michael Smith’s Edward Nygma will deepen in Season 3, although Smith admitted that when we rejoin Nygma at the start of the season, he’s “still chilling in Arkham, receiving gifts from [Penguin], but why, we don’t know.”

“In light of what happened to Penguin last year, losing both his parents, being cast out by everyone he trusted, he has a big hole in his life,” Taylor said of Penguin. “He needs allies, he needs people by his side, so his connection with Nygma falls right into that.”

Barbara and Tabitha will be keeping themselves busy with a new nightclub called Sirens, Erin Richards revealed on the panel. “All of the naughty characters in Gotham will be passing through our club, it’s a moment for Barbara to come into her own,” she teased. “She’s coming to be the person she always wanted to be.”

The producers promised that Bruce will be continuing his journey towards becoming the Batman we know and love in Season 3, and Gotham, too, will be heading towards the darker future that necessitates the Dark Knight putting on the cape and cowl in the first place. “In a city like Gotham, anything can happen, anything will happen,” said executive producer Danny Cannon. “Gotham is going to keep spiraling out of control, otherwise that masked vigilante is not going to be necessary.”

Mazouz previewed, “Bruce is training with Alfred all the time,” but last season, much of his detective work put the people he cares about in danger. “If he’s going to continue the path that he’s on, he needs to take a step back and think about what his grander purpose is and what he wants to accomplish. By the end of Season 3 he will know that he wants to go towards Batman.”

The show is introducing The Mad Hatter, among other villains, in Season 3, but the producers also teased the potential for the return of Cameron Monaghan’s Jerome, in one form or another. “Death is not the end – in Gotham you can’t keep a bad man down,” Stephens teased, noting that we’ll start to see more people who were inspired by Jerome’s antics coming out of the woodwork. “He’s been lionized as an almost Manson-esque figure.” Sean Pertwee also teased that you’ll start seeing graffiti on the city streets espousing Jerome’s ideology, including a few stray “ha ha ha” scribblings.

The producers also admitted that while we haven’t met anyone in the world of the show who could become Ra’s al Ghul yet, they’ve discussed introducing the iconic villain. it’s a conversation that we’ve had, but it’s a big step if we ever took it. It’s a maybe.”

The Comic-Con panel also offered a new teaser trailer with footage from Season 3, including a first look at Jamie Chung’s journalist character Valerie Vale, complete with her camera, along with shots of Jada Pinkett Smith’s Fish Mooney wreaking typical havoc, and hints of the mysterious Court of Owls and their deadly assassin Talon as he faces off against Alfred.