‘Gilmore Girls’: Secrets of the Musical in the Netflix Revival (Watch) 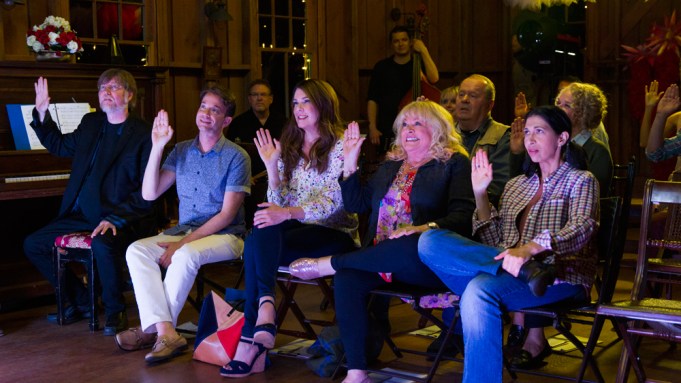 Broadway is coming to Stars Hollow.

The return of “Gilmore Girls” not only heralds the much-anticipated reunion of all the fan favorite characters — along with Rory’s lineup of boyfriends, there’s Kirk, Sookie, and cranky Michel — but also brings a few new faces to the picturesque Connecticut enclave.

Town selectman Taylor Doose (Michael Winters) decides to stage a musical to celebrate the town’s history, and who better to star in the hilariously awkward recreation than Broadway legends and Tony winners Sutton Foster and Christian Borle. And naturally, Carole King makes a return, too, as Sophie — with a scene-stealing turn that would be criminal to spoil.

The musical appears in the “summer” episode, the third of the four 90-minute episodes of the Netflix revival, which debuts Nov. 25. Variety was on set for the rehearsals back in March, as “Gilmore Girls” co-creator Amy Sherman-Palladino was helpfully dispensing sunscreen, and Foster and Borle were practicing their lines and dance moves while cracking each other up.

Sherman-Palladino wrote the lyrics along with her husband, Dan Palladino (who also directed the episode), while composer Jeanine Tesori (“Fun Home”) wrote the music, four songs in all.

Here, Tesori tells Variety about her journey from Broadway to Stars Hollow:

Were you a fan of the original “Gilmore Girls”?

I didn’t watch it in the day when it was running. After I got to know Amy and Dan, I went back and watched all of it, and understood why everyone loved it. I did know that there was a “Caroline or Change” reference (on the show). And I thought, who are these people? It’s wonderful writing. They’re great, very true to who they are. I was very happy and enthusiastic to come on board.

How did you get involved with “Gilmore Girls: A Year in the Life”?

I got to know Amy and Dan through Sutton. They came on board as producers of “Violet” when we moved from City Center to Broadway, and then we were looking for a project to do together. There were certain things that didn’t work. And then out of the blue I got a call, and Amy said, “Can I send you some pages? We’re doing a musical inside the show,” and I thought, “Hell, yeah.” She said the first song plays in about a week. It’s a quick turnaround. They just started sending me lyrics. They sent me a big long monologue and I said, let me fashion lyrics out of it. They’re so quick and funny. But we never worked in the same room.

How did that work?

Even though we’re not in the same room, their tone comes across in emails and texts. They’re hilarious. They love outrageous ideas. It was really fun and easy — and it’s often neither of those things. The way that the musical would go was that Taylor was really trying for it to be great. He’s writing what he thinks is a great musical. We started there and just bounced back and forth.

How long did it take you to write the music?

It was quick because it had to be quick. Most of the songs I turned around overnight or in two days. And then we’d go back and forth and tweak a little. I had Christian and Sutton together in rehearsal for two of the songs, but then I wrote the last piece on a Saturday and they were already starting filming on Monday.

Have you ever written that fast?

Yes. I did a lot of animated movies for Disney. We’d have to turn around things that quickly. Also in previews often you have to write a song overnight to get it ahead and orchestrated and into a show. I like working that fast. I’m better with pressure. Otherwise I don’t get anything done.

You ended up writing four songs in all for “Stars Hollow: The Musical.” Which is your favorite?

“Love Revolution” is my favorite because Carole King wrote the hook and Dan filmed her singing it and they sent it to me. That literally made my life. I love her so much. I can play every single damn note of “Tapestry” still.

You’ve worked with Sutton before; how did this experience compare?

I’ve been writing for Sutton since she was about 24, 25. I know her voice really well. That’s what makes it so quick. I know what her range is. I know what she can do. I’ve heard her sing hundreds and hundreds of songs. I like writing for specific voices so when I wrote her solo, I didn’t have to change keys. I know the timber of her voice. She’s got a big, big range so she’s really fun to write for. So is Christian. He sight sings. He was already making really funny choices as soon as he learned it. Not everybody can do that.

What’s next for you?

I think “Gilmore Girls: The Stage Musical” is next. (Laughs.) That’s what I’m hoping. Fingers crossed.

Would you write the music for it?