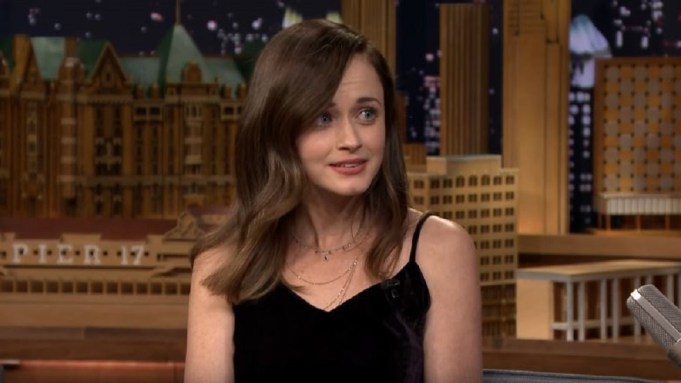 Courtesy of The Tonight Show

Alexis Bledel is just as surprised with the last four words of “Gilmore Girls” as fans are.

The 35-year-old actress appeared on “The Tonight Show” with host Jimmy Fallon on Tuesday, where they discussed the highly-publicized last four words that ended the revival of the cult-class series. Fallon, who is a fan of the show, was anxious to know when and where exactly Bledel found out herself.

“[Creator] Amy [Sherman-Palladino] told me, and I was very shocked,” Bledel revealed (watch clip above or here). “She told me when we were putting together this reunion.”

Sherman-Palladino, who wrote the last four words to end the series over a decade ago, was never able to use them after she and husband Dan Palladino left the show in 2007 over a contract dispute. However, the reboot not only provided a chance for the ultimate reunion, but also gave Sherman-Palladino the opportunity to end the show the way it was intended.

“It’s so secretive, and so Amy,” Bledel said.

While also on the show, Bledel addressed her slightly peculiar poses on the promotional posters for the reboot, most notably the way she holds a coffee mug, as well as flowers in the “Spring” promo. However, Bledel defended her ability to hold said objects, jokingly saying she was “set up for failure” with the large-sized mug she was given.

“Well, mostly it’s not normal because it’s an oversized coffee mug — that coffee mug is almost as big as my face,” laughed Bledel.

The actress also revealed her four favorites characters from the series, which may surprise you. Check out the clip below to find out.

“Gilmore Girls: A Year in the Life” is now streaming on Netflix.