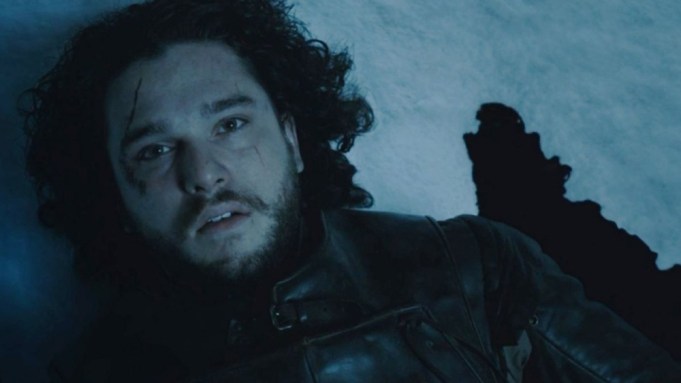 For “Game of Thrones” fans who might have theorized a little too deeply about whether Jon Snow was going to return for season six based on the way his eyes looked at the end of season five, we finally have an answer.

Co-creators and showrunners David Benioff and D.B. Weiss set the record straight in our cover story this week: “Jon Snow is dead.”

Interjects Weiss, “… We spent good money on this.”

“Your pupillary muscles relax when your body gives up,” adds Weiss.

Weiss continues the banter with, “It is called a ‘pupillary sphincter,’ as a matter of fact, we looked this up on the Internets and it said that your pupillary sphincter relaxes and that your eyes dilate, and if you look carefully, Jon’s pupil dilates — the one that’s in the light dilates.” And yes, he says “Internets.”

Benioff then adds a bit about muscle relaxation upon death and the infamous “gas” released from the body in those moments. We’ll let you watch for that savory phrase in the video.

George R.R. Martin is still working on “The Winds of Winter,” which means Benioff and Weiss have continued the story without using Martin’s books as a roadmap. So, it’s all fair game.

“This is us carrying the story forward from the end point of the final book,” says Weiss. “That was both very exciting and a bit terrifying at times.”

“Game of Thrones” has been immensely successful for HBO, something the network hasn’t been able to match even with promising newcomers like “Vinyl.”

The epic battle for the Iron Throne might not last much longer — with only seven episodes in season seven, and six in the eighth and final season — but it’s still too soon to tell if and when exactly winter will set on “Game of Thrones.”

“We’re down to our final 13 episodes after this season. We’re heading into the final lap,” says Benioff. “That’s the guess, though nothing is yet set in stone, but that’s what we’re looking at.”

The sixth season of “Game of Thrones” premieres on April 24.