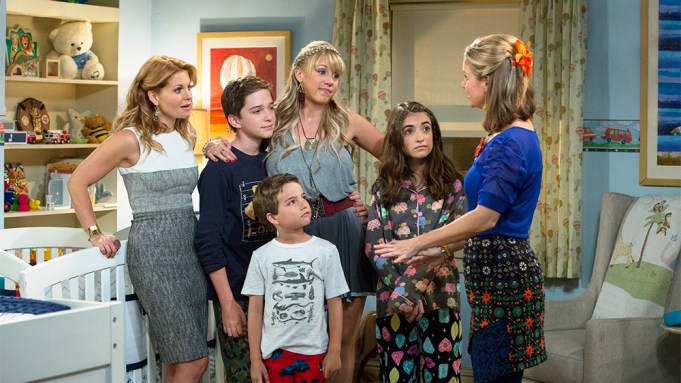 UPDATED: Have mercy! Netflix has finally given us the entire “Fuller House” trailer.

The stars of the Neflix revival, Candace Cameron Bure (D.J. Tanner-Fuller), Jodie Sweetin (Stephanie Tanner) and Andrea Barber (Kimmy Gibbler), debuted a clip from the trailer Tuesday on “Ellen,” and the streaming service released the full version later that day.

Netflix also released a behind-the-scenes featurette for the show on Tuesday.

The trailer is chock-full of ’90s references, including catchphrases from the original show, such as “Hola Tannerinos,” “Have mercy,” “Cut. It. Out” and “How rude” — including some courtesy of Uncle Jesse (John Stamos) and Uncle Joey (Dave Coulier).

“My moves are all that and a bag of chips. Talk to the hand, loser. Oh, snap! You go, girl. I think I just did,” Kimmy says in the video after Stephanie tells her she’s stuck in the ’90s.

The trio also said on “Ellen” that “the door is open” for a guest appearance from Mary-Kate and Ashley Olsen (Michelle), who aren’t returning for the new series.

“We make reference to them on the show though so they are not forgotten. We talk about them,” Cameron Bure said.

“Full House” and “Fuller House” creator Jeff Franklin said last month that he was hopeful for the Olsen twins’ return in future seasons.

“I tried. We all tried to persuade them to come and play. They decided not to at this time,” Franklin said. “We’re hopeful at some point in the future, they may change their minds and reprise Michelle. We only need one of them!”

Watch the “Ellen” clip below, which begins around the 2:30-minute mark, as well as Netflix’s featurette.