Continue to Variety SKIP AD
You will be redirected back to your article in seconds
Feb 16, 2016 9:54pm PT 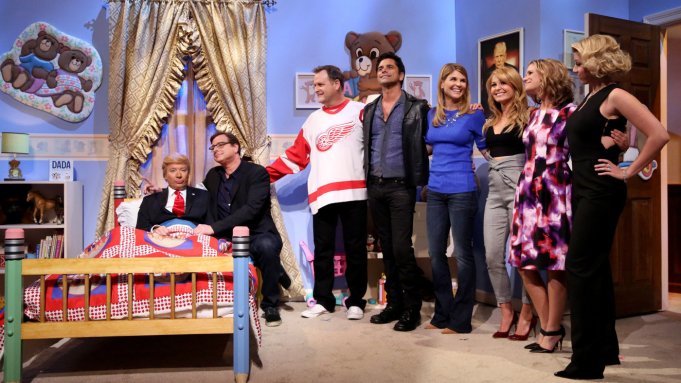 It was a “Full House” on “The Tonight Show Starring Jimmy Fallon” Tuesday night when the late-night show was in Los Angeles for a week-long visit.

Dressed up as presidential hopeful Donald Trump, Fallon sat in Michelle Tanner’s bed on a “Full House” set that was made to look like an exact replica of the TV room that belonged to the character made famous by the Olsen twins.

Visited first by Bob Saget’s Danny Tanner, Uncle Joey (Dave Coulier) and Uncle Jesse (John Stamos) then came into “baby Donald’s” bedroom. The “Full House” guys were then joined by the rest of the cast — which was all in L.A. for the premiere of “Fuller House, which was also held tonight — including Candace Cameron-Bure, Jodie Sweetin, Andrea Barber and Lori Loughlin.

“I was trying to have a heart-to-heart with my three dads until you guys interrupted me. How rude,” Trump (Fallon) said when the Tanner girls came into the bedroom.

Besides “how rude,” the skit was packed with “Full House” catchphrases and Trump jabs, including lines alluding to his controversial comments on immigrants, his campaign slogan “Make American Great Again” and Danny Tanner giving his signature fatherly advice — “Remember, Donald, if you win and become president, that’s great, but if you lose and don’t become president, we’ll be even prouder,” he said.

Much to the surprise of the “Tonight Show” audience, including this Variety reporter, Uncle Jesse (Stamos) and Aunt Becky (Loughlin) shared a big smooch during the skit. Earlier in the day, Loughlin took to Twitter to celebrate the characters’ 25-year anniversary.

Fallon and the “Full House” guys put on a similar skit in early 2014, though the late-night host was not playing Trump.

“The Tonight Show Starring Jimmy Fallon” is in L.A. all this week, and “Fuller House” debuts on Netflix on Feb. 26.