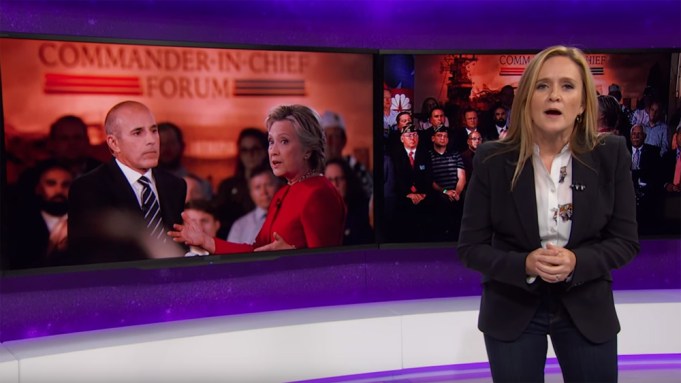 Samantha Bee is back and is ready to sting.

Bee returned to TBS’s “Full Frontal with Samantha Bee” after a five-week hiatus to give her commentary on NBC’s much talked about Commander-in-Chief Forum, mostly criticizing Matt Lauer’s interviews with both presidential candidates.

“Oh come on Matt,” Bee quipped. “Do you really think there’s an email smoking gun that the inspector general, the house committee, the FBI and 18 months of nonstop news coverage couldn’t find that’ll be magically uncovered by seven minutes of questions from a human Splenda?”

Bee then went on to question Lauer’s journalistic integrity.

“Maybe this Halloween, [Lauer] can dress up as a journalist,” Bee also remarked.

“I bet the veterans have some things they’d like to ask a draft-dodging, gold-star family insulting, war-crimes advocating torturephile, whose worst Vietnam flashbacks involves scrambling for the last plane out of gonorrhea,” Bee said.

Bee also critiqued the many networks’ deficiency at reporting the truth regarding the disastrous forum.

“At some point, networks decided they could ask questions, and answers would just be someone else’s problem. Specifically, yours,” Bee said.

Watch part 2 of Bee’s coverage below.