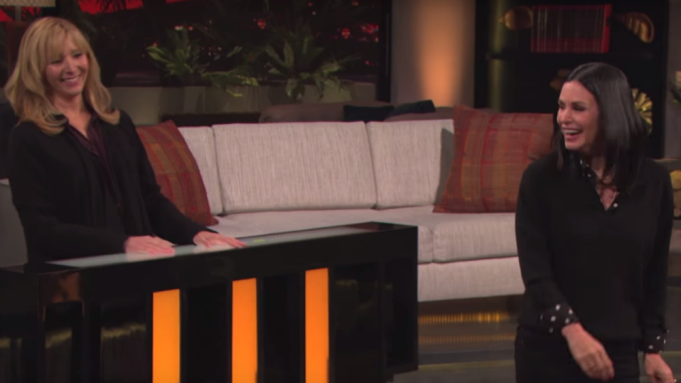 Phoebe and Monica got back together to test their “Friends” knowledge on “Celebrity Name Game” which originally aired Sept. 20.

In the special bonus round clip, Courteney Cox gives clues to words and phrases associated with “Friends” and Lisa Kudrow has to guess the answer.

“I was married to him.” Chandler Bing

“Where we had coffee.” Central Perk

“You sang a song about it.” Smelly Cat

The only clue that caused the unflappable Kudrow to even mildly stumble was, “He was across the way. We would look at him through the binoculars.”

Overall the two ace the quiz and end the match with an adorable high five.

Nearly all of the core six members of the “Friends” crew reunited as recently as February during NBC’s tribute to director James Burrows. Matthew Perry was sadly absent because he was filming in London.

Still, when they’re not quizzing each other on Craig Ferguson’s game show, Cox and Kudrow are still keeping busy. Following the cancellation of her show “Cougar Town,” Cox most recently starred in the 2016 film “Mothers and Daughters” with Susan Sarandon. Kudrow, meanwhile, recently had a guest turn on “Unbreakable Kimmy Schmidt” Season 2 and will appear in the highly-anticipated “The Girl on the Train.”

Watch the full speed round in the video above.